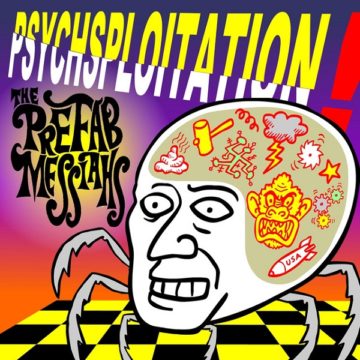 It was once said that Electric Light Orchestra picked up where The Beatles stopped at “Strawberry Fields Forever.” If that is true, then The Prefab Messiahs pick up where Count Five left off — and this is a good thing. This is a genre of music that needs to continue. The Prefab Messiahs have the talent and ability to write and play this genre of music while mixing in their own style.

The Prefab Messiahs have been making records since 2011, with their debut album being Peace Love & Alienation. Psychsploitation . . . Today! is their fourth album, and their first since 2015’s Keep Your Stupid Dreams Alive. On Psychsploitation . . . Today! (they do have great album titles), they continue their love of 1960s garage pop/rock jammed full of guitar and brilliant harmonies.

There are no real surprises with this album, and in fact a couple of the songs were issued in 2017 as singles (“Sometimes Sunnydaze” and “The Man Who Killed Reality”), but they honestly fit well on the album and act as perfect standalone singles.

“You really got a lot of nerve, To think you know what I deserve” kicks off the album with the opening song “Psychsploitation.” It sets the tone musically and lyrically. No one is going to push these guys around. That is not to say it is an angry album, far from it. It is a fun, guitar and energy-fueled collection of songs.

The album ends on a more somber note, but it ties in with the entire album. “On your last day on Earth, Who will you be?” is the question posed in the closing song, “Last Day on Earth.” A rally call to stand up on your own or, as they sing, be “a puppet on a string.”

Do not mistake their energy and guitar-driven garage rock as these guys producing unintelligent music; quite the opposite. The lyrics are well-thought-out and the music is expertly played. It is well-produced by the band itself. This is an album that takes a look at the stressors facing the average person on the street, albeit from an American point of view, but the same concerns are worldwide. Their philosophy seems to be ‘Let us deal with world issues with a sense of humour and sometimes a sense of irony.’

The Prefab Messiahs get better with each album, and with each album they keep extending their reach to incorporate some new sounds and harmonies, and stronger lyrics. A great album, and one that you will want to keep returning to until they release some new music.

Born and raised in Whitby, Aaron discovered music through his love of The Beatles. This led to a career in radio, writing for various publications, and ultimately a radio show about The Beatles (Beatles Universe), which ran for over four years. When not immersed in music, Aaron enjoys spending time with the loves of his life -- his wife Andrea, and daughters Emily and Linda (all of whom have an intense love of music too).
RELATED ARTICLES
album reviewsburger recordslolipop records
7.0