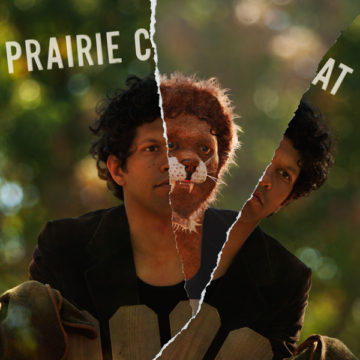 Prairie Cat is Cary Pratt and Is Cary Pratt is the name of his latest release.  Pratt is the lone member of the band, playing all the instruments, and writing the entire album. The album was co-produced with Ryan Dahle (he has produced The New Pornographers, Mother Mother, and Hot Hot Heat). For the record, this is album number four for Prairie Cat, and it seems he is ready to let the world know he is Prairie Cat.

Pratt has certainly learned how to make records over the past few years.  And the result is a very consistent album, a well played, well structured consistent album and this may be the main problem with the album.  The songs are extremely well crafted and quite pleasant, but the overall effect is that there is not a great deal of variety on this particular release.  He does not move from the comfort zone he has found with this album.  Ironically, he sings ‘I can’t stand when the music all sounds the same’ in the lead off single, “Leave A Note”.  That particular song is a highlight on the album and he has created a brilliant video to accompany the song.

Having said that, it is a very good album, full of pleasant sounds and wonderful harmonies.  It reminds me of the pop hits of the ‘70’s,  the music that filled the AM airwaves before disco came along.  Pratt knows how to structure a song, and the tunes are remarkably catchy.

Lyrically the album is about love, loss, rejection and relationships in general. Again, very reminiscent of older songs and older song styles, but this is not a bad thing. He sings the songs with conviction and again his voice is perfect for the style of music.He also does an incredible job harmonizing with himself.

A strong effort and overall a good album. Perhaps losing the Prairie Cat name and going under his own name, he will feel more free to experiment with his music and sound. In the meantime, a great summer album to accompany you to the cottage or the family barbacue.

Born and raised in Whitby, Aaron discovered music through his love of The Beatles. This led to a career in radio, writing for various publications, and ultimately a radio show about The Beatles (Beatles Universe), which ran for over four years. When not immersed in music, Aaron enjoys spending time with the loves of his life -- his wife Andrea, and daughters Emily and Linda (all of whom have an intense love of music too).
RELATED ARTICLES
album reviewsis cary prattleave a note
9.0