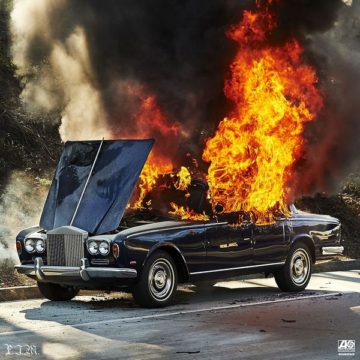 On Portugal. The Man’s eighth album, Woodstock, the band plays around with several different elements but never confidently lands its stride. The now electronic indie outfit had its sights set on creating an album that “mattered” according to lead singer John Gourley. The result is a mixed bag. While their efforts take them to new heights, we also find Portugal. The Man at its lows. What’s most alarming, however, is how after eight records, the band’s identity is still a bit blurred.

When opening track “Number One” slowly adds instruments to create something riveting for the band, it can only act as a bit of disappointment to some of the tracks that follow. Almost instantly after the groovy opener, the overproduced, jumbled “Easy Tiger” takes its well pruned verses and spoils its potential at the chorus, where the band tries to juggle too many elements at once. This is a common theme here on Woodstock, where potentially great tracks slowly lose their footing. This is evident on “Rich Friends”, whose opening drum and tambourine combo create a really unique melody. But again, the chorus doesn’t play to the song’s strengths. In this case, “Rich Friends” goes from fooling around with psychedelic elements on those vocals (plus a banging background chant of “I could really really use a rich rich friend like you”) to going full beach, hands in the air, teen anthem on the chorus. The result is banal at best.

It’s not all thwarted potential though. Lead single “Feel it Still” is one of the band’s most successful, and rightfully so. The track bobs along with funky horns in full swing, and could easily settle into an indie film soundtrack. Then there’s “Keep On”, whose arrangement is what one could imagine Nirvana testing out if they stuck around long enough to evolve into indie rock (except trade in Kurt Cobain’s gritty vocals with something more along the lines of Foster the People).

The band has fun here too. Woodstock’s best track is “Tidal Wave” which sounds like it might have been pulled from an Electric Guest record, but still shines with all the elements of previous songs – horns, chanting, blended synths – except it is far more cohesive than its counterparts. This kind of pop sensibility is useful on the destined-to-be-future-single “Live in the Moment” whose “la la la” pre-chorus is playful enough to fit on a record that seems to be willing to try just about anything.

And truly, it is the constant shifting of elements that keeps Woodstock so interesting. But the gimmick of changing the scenery can only last so long until you realize that Portgual. The Man might be disguising the fact that it still carries no discernable features. To confuse some of Woodstock’s tracks with other indie bands of the current age is far too easy. Without a signature, Woodstock acts more as a collection of indie experiments than a triumph of a well-seasoned band.

Robert Defina is an avid critic both on paper and in person. He spends more time writing album reviews than he does worrying about his future. He hopes that this sort of procrastination never grows old.
RELATED ARTICLES
album reviewsfeel it stillportugal. the man
8.0