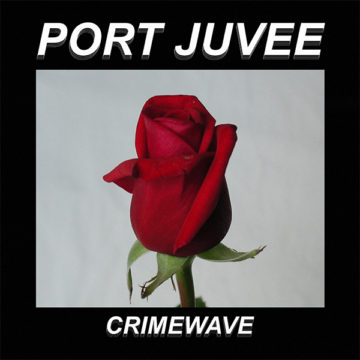 Despite their success and wide acclaim in 2014 with their EP Revenge, Calgary, Alberta’s own garage rocking Port Juvee have come a long way since their “Bleachers” days / radio competitions. Consisting of Brett Sandford (vocals), Jourdan Cunningham (guitar), Logan Juke (bass), Lauchlin Toms (guitar), and Distance Bullock (drums), they are continuing to ride a larger post punk / surf garage wave to a wider audience as they release the seven track Crimewave. With new and current drummer Dylan MacLeod as a mainstay for future performances, the accomplishment of this album is something that can be appreciated.

The songs on this release average about two and a half minutes per song, which is good and not over saturated. This isn’t a particularly heavy album that will make you want to break shit or amp you up, but once you’ve had a listen to it a few times, the songs begin to convey a certain catchiness. I have to admit, the thing that struck me the most (no pun intended), was Bullock’s entertaining and adept drumming chops, as heard on “Double Vision” and “Crimewave”. I don’t know if that’s a good thing or a bad thing when I can single that out on an album. I guess that’s up to the band to say if that was their intent. Front man Sandford’s calm vocals layer the tracks and don’t come off as bog-down heavy. An example of this would be in “Bleached out Soda Pop” and “Mania”, where Sanford’s minimalist vocal energy / range is juxtaposed with the high energy of the instruments. As a whole album, I found the lo-fi sound of this band repetitious throughout the tracks (for some, not a bad thing), and would have liked to have seen more experimentation with other instruments to enhance their wall of sound / soundscape (which is a good listen) as they changed the tone on this album. In regards to vocals, I’d like to see Sandford bring more notes to his vocal range, and to push the envelope within the scope of the tracks to stretch out his ability, as he did on “Slowly By”.

This album offering shows much promise as Port Juvee continues to hone their sound and instrumentation. Hopefully on their next album, they will delve into the minimal lyrics of their song writing and try to increase their basic prose to something more imagery significant in the larger context of their songs / album, to add more value to their work as a whole. Port Juvee continues to be a work in progress as their cohesive, and now bigger sound continues to evolve and grow towards the positive trend, early on in their career, much to the delight of their fans and listeners.

Insert pretentious stuff about me here. I was born at a very young age. I am pretty, funny... without the comma. Easily distracte
RELATED ARTICLES
album reviewscalgarydouble vision
8.0