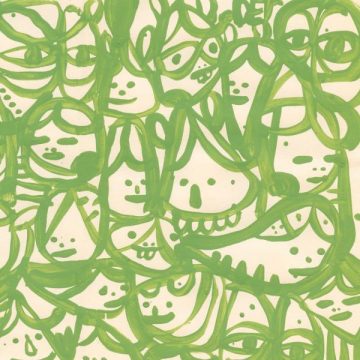 The Pooches is an earnest Pop group. It is not intensely brooding or melodramatically poetic; its music is approachable and energetic. This Glasgow-based foursome is more than easy to get along with. Its self-titled debut was released on September 9, and its brief runtime is packed full of innocent love and laidback charm. It isn’t overly challenging – for good or for ill – but doesn’t fail to please.

The story begins with Jimmy Hindle’s solo work, a collection called Smoochin’ with the Pooches funded through Kickstarter and released in 2013. A limited-edition tape and second homespun recording followed, but Hindle has now built a four-piece outfit around his musings. This LP is the debut for this line-up, and lo-fi College Rock fans will find it worth the wait.

As mentioned, it isn’t a long album, its 10 tracks clocking in at less than 24 minutes. The band sticks to the basics of popular structure, following every verse with a chorus that is almost guaranteed to get stuck in your head. The guitars, especially, recall the Indie-Pop sound of the ’80s and ’90s. The vocals are also clean-cut and forward in the mix, Hindle’s voice telling a story rather than putting on airs. It isn’t minimalist, but this is absolutely a four-piece Rock group that only needs a few amps and a drum kit to pull off its sound.

On its Bandcamp website, the band’s name appears in the style of the ‘Friends’ logo—so yes, you’ll be forgiven if The Rembrandts’ “I’ll Be There For You” comes to mind as you listen. But this isn’t just cheery fluff. In “I’ll Be Gone” (it’s fun to consider this an homage to that ‘Friends’ theme), Hindle first laments that “someone else will come along / write you a better song / do less things wrong.” But he concludes that this other person won’t “like you like I did,” and that when they “sing a sh*tty song / and they do everything wrong,” he’ll be gone. There is something satisfying about the layers in Hindle’s writing, as he catches your ear first, in order to deliver some witty and frank thoughts on love and break-ups. Mostly break-ups, of course; there’s no deeper well for songwriters to draw from.

That isn’t to say that the well is infinite. You may get bored with another story about loving someone, or formerly loving them, or loving the former version of them… and so on. In that case, the personal reflections won’t let you down. Take, for example, the chorus of “Everything”: “I don’t want to be the kind of boy who thinks that everything is about him.” Hindle’s notions of himself and others are easy to take personally – in a good way.

Nothing drags or yawns on the album. There are some Punk influences when it comes to brevity. “Japan” is a fun tune that only takes up 37 seconds. What’s the story? Joey’s going to Japan. The album is closed out with “Mulligan,” which is far and above the most mature and thoughtful track. Second chances at love, whether or not they’re ever going to happen, are another common topic, but Hindle manages to speak well on it.

The Pooches are a supporting cast, rather than a songwriting democracy. Hindle and his bandmates play and harmonize capably; they don’t need to be virtuosos to back these simple little songs. But we shouldn’t sell the album short, either. It’s smarter than it needs to be, and it has heart that shines through the basic production. As far as upbeat Guitar Pop goes, it will please you and keep you coming back. And as a direct result, as you’ve been warned, you will find a lot of the hooks and melodies stuck in your head afterward. But in this case, that isn’t a bad thing at all.

Shane believes in music – the more honest, the better. He listens with his ears, which are really just a tool of the brain, which is definitely and completely subject to the whims of the heart. It's really a team effort.
RELATED ARTICLES
heart attacklame-o recordsthe pooches
8.0