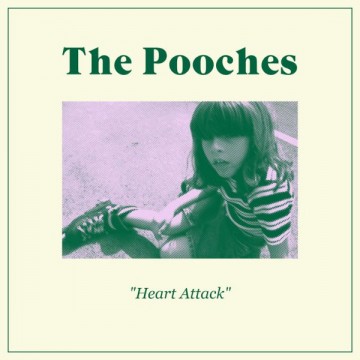 Geography has always served as ambivalent signifier for bands. The Strokes were compared to Television upon the release of their first record; Coldplay were categorized as Radiohead fed through a Starbucks coffee filter; and The Hold Steady cited The Replacements as a sign of civic pride.

So without a doubt, The Pooches are going to be compared to fellow Scottish indie-pop acts such as Teenage Fanclub, and Belle and Sebastian.

And the similarities are all over the place; the warm, clean guitars, the lighthearted and sometimes poignant vocals, and the pocket rhythm section accented with handclaps.

The first single, “Heart Attack,” sounds like an afternoon spent listening to old records, telling lazy jokes, and generally not really doing much.

But the lyrics are not without their nuanced admissions of day-to-day anxieties.

The way frontman Jimmy Hindle’s matter-of-fact delivery of the words “a friend of yours gets to fulfill all their dreams/ and that depresses me,” suggests an optimistic Conor Oberst on just the right mix of SSRIs.

Although The Pooches’ sound generally mirrors that of bands that were in their prime in the ‘90s, influences from the mid-aughts shine through as well. Both “Heart Attack” and “Crabhammer” bear resemblance to The Shins, and could have been used over the credits to the end of an episode of The O.C. or an iPod Mini commercial, and “Pierre” sounds like Vampire Weekend if they spent a few extra days at whatever all-inclusive resort they were staying at when they wrote their first record.

The EP closes with “Rhythm Of The Rain,” a short surf-pop track with a little Glaswegian overcast thrown atop. It’s a nice little song that sounds like it was written about as quickly as it takes to listen to it. It’s not the most brilliant piece of pop music, but it’s decent company.

Heart Attack is a delightful little pop record that politely asks for less than 10 minutes of your time, and really wouldn’t be offended if you don’t feel obliged

Marko Woloshyn is a Mississauga-based writer and musician. He owns a limited edition repressing of Mclusky Do Dallas and one time at a concert a drunk woman told him he looked like Keira Knightley.
RELATED ARTICLES
album reviewsheart attacklame-o records
9.0