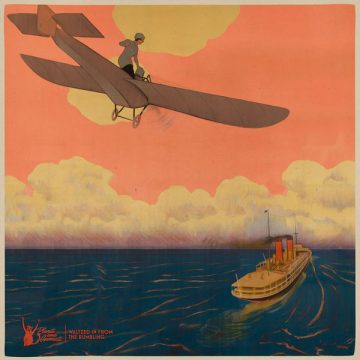 Plants And Animals
Waltzed In From The Rumbling
Secret City Records

Canadian indie alternative outfit Plants and Animals meanders around folky vibes caught up on dreamy, Radiohead-like soundscapes with Waltzed in from the Rumbling – an 11-piece set that is fortified on evolved songwriting and delightful compositions. Instrumentals are at a high point throughout, from subtle cascading violins on opener “We Were One” to clap along percussion on the stand out “No Worries Gonna Find Us” or even the guitar pluck-accompanied choral harmonies of “Flowers.” The record’s cover drives home an image of warm summer sunsets, and the music tonally speaks to this image. Plants and Animals fly through an elevated lullaby on their fourth record, with varying levels of vocal volume complementing tingling pianos, and sometimes occasional horns, as seen on “Je Voulais te Dire.” All of it is executed well; there are no choices made by the band that seem questionable throughout the record’s duration.

This is contributable to the fact that Plants and Animals have always been open to showcasing new material on each record. Here on Waltzed in from the Rumbling the group finds a comfortable niche filling the empty spaces left from long droughts of melodic alt-rock conquered by Arcade Fire’s Grammy-winning The Suburbs. Lead single “No Worries Gonna Find Us” is the prime example of this reflected sound. Where this leads, though, is simply down a road far better suited for imitation than unique creation – something that Waltzed in from the Rumbling tends to lack overall. Originality finds itself without a friend on the band’s fourth LP, a milestone that should have seen them producing solid, signature material by now. Whether this is an unintentional romp of fun music that finds them constantly sounding like their influences or a desired outfit, the styles that Plants and Animals wear suit them well but don’t allow them to shine as they could. There is clearly talent among the dynamic they have here, but it is this lack of identity that draws away from their substance. Not to say the record is substance-less. Many moments draw in some deep lyrics accompanied with catchy melodies and wonderful arrangements, but they are overshadowed by the very bands they draw inspiration from.

These notions aside, Waltzed in from the Rumbling is a solid listen. There are many good tracks here; they just might have been better had they been made by the artists they clearly imitate. Fans of alternative indie rock will be satisfied with Plants and Animals’ most recent foray. What they’ve made here is truly great music. It’s just not great art.

Robert Defina is an avid critic both on paper and in person. He spends more time writing album reviews than he does worrying about his future. He hopes that this sort of procrastination never grows old.
RELATED ARTICLES
album reviewsflowersno worries gonna find us
10