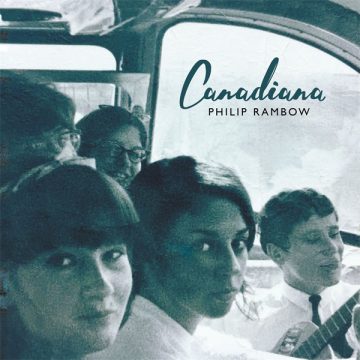 When you listen to the new Philip Rambow album, Canadiana, the first thing you realize is that five years between albums is simply too long. His last album, 2015’s Whatever happened To Philip Rambow, was a fantastic album and left us wanting more. Canadiana is here and well worth the wait, it is just a shame it was such a long one.

The album is full of very original songs. The style ranges from traditional country to blues to folk, While the music is acoustic-based and has a country feel, it is not country and western, modern country, or Americana.  From the opening track, “American Buffalo” to the exquisite closing track, “Devoted To You”, Rambow tells his tales and keeps the listener enthralled and captivated.

Rambow sounds strong, confident, and to these ears, his vocals have never sounded better. His acoustic guitar work fits perfectly into each song and his backup musicians fill in the spaces perfectly. Sharlene Hector duets with Rambow on two songs (“Out On Your Own” and “Oceans Apart”), and her vocals mesh perfectly with Rambow’s. Other players that add a great deal to the mix include Martin Belmont on electric guitar, Pete Thomas on drums, and producer Paul Cuddeford on guitar.

Lyrically, Rambow continues to explore human themes, loss, separation, revenge, and life in general. “Oceans Apart” is a particularly powerful song, with brilliant imagery and an equally strong melody. A clear highlight of the album. Overall, it is love that he comes around to and ends the album with.

This album is full of little surprises here and there. Philip Rambow takes this on with one foot in traditional music, and one foot in his own camp. He is an interesting artist who has crafted a near-perfect album. Canadiana is very strong and full of great songs. It is an album that Rambow should be very proud of adding to his stellar catalogue.

Born and raised in Whitby, Aaron discovered music through his love of The Beatles. This led to a career in radio, writing for various publications, and ultimately a radio show about The Beatles (Beatles Universe), which ran for over four years. When not immersed in music, Aaron enjoys spending time with the loves of his life -- his wife Andrea, and daughters Emily and Linda (all of whom have an intense love of music too).
RELATED ARTICLES
album reviewalbum reviewscanadiana
8.0