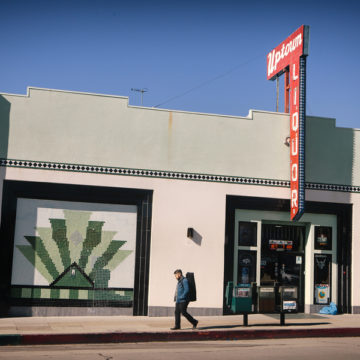 In 2017, Chris Schlarb (of Psychic Temple) announced the launch of a new record label, Big Ego. It is a subscription-based label, which means you pay a fee once a year and receive four albums a year. All of the albums are to be produced by Schlarb. Two are released in January and two in July. Outsider, by relative newcomer Philip Glenn, is the first release. Glenn is a founding member of the band The Show Ponies, but here he is branching out on his own.

Schlarb picked a fine album to launch the label. This is an energetic bluegrass, blues, traditional Irish, and punk album. If CBGB was a label when it was in its prime, it would sound something like this. Glenn even covers a Ramones track (“Outsider”), which Glenn works into a medley with the traditional fiddle song “June Apple.” And it works beautifully.

Outsider is an excellent title for this album, as it sits on the outside of most common genres, but that is what makes this album so incredibly wonderful. It is its own sound, and what a sound it is! Recorded in a day and a half, the energy bursts off the vinyl, and from the opening title song to the last, I was hooked.

Glenn describes himself as a ‘Filipino kid from Los Angeles playing mountain music.’ Although trained in classical music, he made the move to bluegrass, feeling like an outsider. But Glenn turns this into a positive. His emotion comes out in his playing and his writing. Listen to “When Sorrows Encompass Me Round,” featuring a stirring vocal performance from Natalie Nicoles. Not to be outdone, Jason Perry Stevens answers her in this twangy bluegrass number. Brilliant lyrics, brilliant production, and stunning arrangement.

The music is played beautifully, and Glenn’s fiddle/violin is blazing and expressive. I could listen to him for hours. He is a talented writer and Schlarb brought together many talented players to accompany him. Schlarb also plays on the album. Credit also to Nathan Hubbard for some serious and restrained drumming.

This is a brilliant debut from Glenn (as a solo artist). One can only imagine what Glenn can come up with in the future. He crosses genres and boundaries with a genuinely creative and imaginative spirit. Brilliant album.

Born and raised in Whitby, Aaron discovered music through his love of The Beatles. This led to a career in radio, writing for various publications, and ultimately a radio show about The Beatles (Beatles Universe), which ran for over four years. When not immersed in music, Aaron enjoys spending time with the loves of his life -- his wife Andrea, and daughters Emily and Linda (all of whom have an intense love of music too).
RELATED ARTICLES
album reviewsbig ego recordsoutsider
7.0