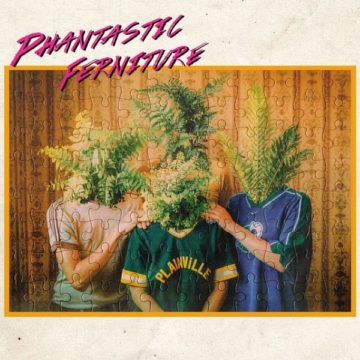 Phantastic Ferniture, the darkly breezy garage-pop debut album of friends Julia Jacklin, Elizabeth Hughes, and Ryan K Brennan, is a passion project in the best sense. Jacklin’s acclaimed 2016 solo album Don’t Let the Kids Win has already proven her to be a talented alt-country artist. Here, she leads the Australian trio in a different direction – a collaborative, younger sounding, more feel-good endeavor with a professed mission of “don’t overthink it”. While Phantastic Ferniture does not add much complexity or groundbreaking originality to the genres it borrows from, it is both extremely well executed and a great deal of fun, with plenty to recommend it.

Jacklin’s vocals are particularly remarkable; they’re more about attitude than lyrics, and she sounds confidently laid-back. At times she floats into expansive soprano or joyful exclamations. Jacklin has good vocal chemistry with Hughes, who provides harmonies throughout. Lyrics are not always discernible, but that’s not really the point on an album that aims, as sung in “Fuckin’ n’ Rollin’,” to “just feel right”.

The words are still worth a mention though, for as much as Phantastic Ferniture is warm and carefree, Jacklin’s lyrics have not entirely lost their depth or darkness. “Gap Year” charms with a catchy chorus about unrequited love –“I would love you, even if you don’t need me to/ I can do it all by myself, yeah” – before descending into a swirling instrumental and vocal breakdown. Jacklin’s pointed, simplistic writing style allows for light, pleasing hooks, as in the blissfully good track “Bad Timing”: “Maybe it’s not the time/ Maybe we were never meant to be/ Oh, maybe you should stick around if you truly love me”.

Other high points include the cheekily named “Fuckin’ n’ Rollin’” which builds relaxed, bright vocals and guitar on top of a strong bass and drum groove. It’s a surf-inspired, not-so-serious reminder to live in the moment. “Dark Corner Dance Floor” sounds true to its name as a sensory night out, noise pop number to get lost in complete, with some slinky, danceable hi-hat rhythms. “Take It Off” and “I Need It” are notable for their heavier, grittier sounds and snaking bass lines. Not all songs are equally effective though; some (“Uncomfortable Teenager,” “Parks”) play it a little safe and don’t add as much as they might in terms of variety.

True to the DIY spirit of garage music, Phantastic Ferniture is a gleeful vehicle for friends to jam and be goofy together. However, Jacklin, Hughes and Brennan are also adept musicians who have, ultimately, created a solid, stylish album. Phantastic Ferniture may not reinvent the wheel, but it without a doubt takes listeners on an enjoyable ride. I’m imagining a fairground Ferris wheel, on a dusky summer evening….