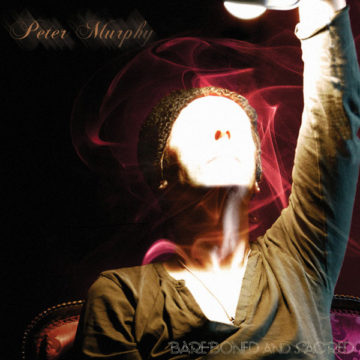 This is actually Peter Murphy’s fourth solo live album. And this is, by far, is his best . It was recorded at New York City’s Le Poisson Rouge in April 2016 during his Bare-Boned And Sacred tour. Some of his live albums did not make any sense (I am thinking the Wild Birds Live Tour release, which did very little in terms of new arrangements). But this album is a different approach to his music, although not acoustic (he has done so in the past), this show was stripped bare with minimal instruments and forcing Murphy to be front and centre. Joining him on stage is John Andrews (guitar, who has been playing with Murphy for many years), and Emilio “Zef” China (bass, violin) who worked with Murphy since 2014. You will notice, no drums.

This is a good thing as Murphy has his voice back again. It is stronger than his last couple of tours, but still not the classic vocal that fans have come to love. Having said that, the new arrangements are interesting and turn age old songs into new classics. “Marlene Dietrich’s Favourite Poem” is a wonderful song, and he really breathes new life into this piece. I love the original and I love this arrangement. It makes for interesting listening.

Not all of the new arrangements work. The “Bauhaus Medley” is something that should not have been done. Medleys work for some artists, but for Bauhaus, it sounds incomplete. I would have rather prefered a complete set of Bauhaus if anything at all. His cover of Bowie’s “Bewlay Brothers (David Bowie Tribute, RIP)” is a beautiful reminder of how Murphy can interpret songs. Go back and check out his cover of “Space Oddity” from 2009. He is clearly a Bowie fan (they appeared in the film The Hunger together) and this is every bit a beautiful tribute as Roxy Music covering “Jealous Guy”.

It may be hard to believe that Bauhaus made their debut almost 40 years ago, and Murphy has been solo for over 30 years. But these are facts, and Murphy seems to be adapting to his role as more of an elder statesman than a new music artist. This does not mean he should give up and retire to the live circuit, in fact, his last album, 2014’s Lion, was a stunning work (some of those songs are found here with new arrangements, including “Lion”) and shows that Murphy still has a great deal to say and produce. This live album seems to be a stop gap measure until he can come up with something new, which I have not doubt he will.

Born and raised in Whitby, Aaron discovered music through his love of The Beatles. This led to a career in radio, writing for various publications, and ultimately a radio show about The Beatles (Beatles Universe), which ran for over four years. When not immersed in music, Aaron enjoys spending time with the loves of his life -- his wife Andrea, and daughters Emily and Linda (all of whom have an intense love of music too).
RELATED ARTICLES
album reviewsbare-boned and sacredmetropolis records
6.0