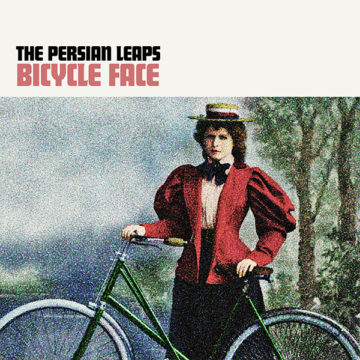 Everybody who thinks they have something to say about music at some point mentions originality. Sure, great, but what do they exactly have in mind? Something exceptional, never heard before, a great combination of known musical elements, what? And then, how many truly ‘original’ artists, true innovators can anybody name?

Usually, that list, particularly in rock and pop can fit on the fingers of one’s hands, no more, possibly even less. If we truly look at the current music scene who you can point to that does not use some kind of musical inspiration?

After all, not everybody can be a true innovator. Playing inspired music is great if you do it great, well will also do, just as long as it holds to some basic principles of the genre. In rock, for example, a good tune and/or harmony, tight playing, sensible lyrics…

So, we come to St. Paul Minnesota’s The Persian Leaps and their latest EP Bicycle Face. Listening to the five tracks that clock a bit under 15 minutes, you immediately get where the guys are coming from – the better side of the Nineties pop/rock or power pop, whatever you want to call it – Guided By Voices, Teenage Fanclub, et al.

Some would say – derivative. I wouldn’t. These three guys know exactly what they are capable of and how to do their best within their

capabilities. What is most important, it sounds like a good clean fun, and you can play it anytime of day or night.

First sign that The Persian Leaps know what they’re doing is the fact that they have not come up with an album so far. For the last five years, they have been coming up with an EP every year. Obviously, the guys don’t want to overstay their welcome. Fair enough.

Secondly, they know their way around a good melody. They don’t miss a beat, and have given the production to somebody who knows exactly what he’s doing (Neil Weir of “Blue Bell Knoll”). As the singer/guitarist Drew Forsberg says: “It’s jangle and riffs, straight-through”.

Exactly. And it is good jangle and good riffs. “About the Lions”, among other things, brought some good memories and made me pull out all those Big Dipper albums I almost forgot about. In essence, music inspired by others, but good clean fun and all you need along with it is some cold fresh lemonade or full cup of rum and raisin ice cream. Sometimes, that is just the perfect thing

Formerly a lot of things, including a journalist and a translator, currently a freelance writer living in The Netherlands.
RELATED ARTICLES
album reviewsbicycle face epeven less
8.0