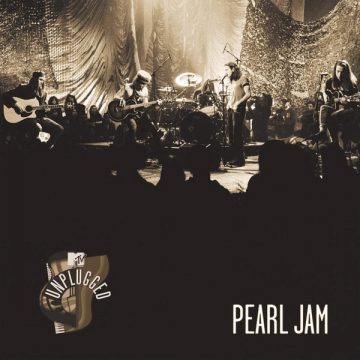 MTV’s unplugged concert series spawned iconic performances throughout the ‘90s. While few, if any, will ever surpass the live albums from Nirvana and Alice In Chains’ respective sessions, Pearl Jam’s 1992 concert has long been sought out as a bootleg. Having been issued on vinyl for Record Store Day 2019, Pearl Jam have now officially released MTV Unplugged on all platforms to celebrate the 30th anniversary of their first ever performance as a band.

Opening with the lush chords and Eddie Vedder’s melodic musings on “Oceans”, MTV Unplugged gets off to a slow introduction that quickly grows in scale and intensity. The band, consisting of Mike McCready and Stone Gossard on acoustic guitars, Jeff Ament with a subdued but plugged in bass, and original drummer Dave Abbruzzese, follow Vedder through the soaring artistic highs of the alternative ballad before kicking off into the up-tempo hard-rocking – and originally unreleased B-side, “State Of Love And Trust”. It is here that one will notice that rather than write alternative arrangements or choose a selection of songs that would lend themselves to an acoustic setting, Pearl Jam have simply swapped out the amps for acoustic guitars and, in a refreshing twist, have maintained the feel, integrity, and style of their work which, in some sense brings a different sense of life to the performance and, ultimately, makes for a unique acoustic performance, even 28 years later.

The remaining five songs take the listener through some of Pearl Jam’s biggest hits from Ten. “Alive” with its lengthy solo section certainly brings a a show-stopping sense of excitement, while ballads “Black” and “Jeremy” feel like a natural shift from electric to acoustic. Vedder’s vocals and ability to bring a raw sense of emotion to his performance particularly shines here. Much like “Alive”, “Even Flow” again brings a driving rock performance to the acoustic setting. For a closer, Pearl Jam dives into the fast paced and intense “Porch” which will likely best be remembered as Vedder took the chance to write “pro-choice” on his arms during the performance – a massive act of protest when you consider how big the band was quickly becoming and the audience they were reaching through MTV. Much like Vedder’s political actions, “Porch” is a relentless closer that brings MTV Unplugged to a climatic close.

Having achieved mythological status among the greatest MTV Unplugged concerts, Pearl Jam lives up to near 30 years of hype on their latest live record. MTV Unplugged is a vastly different album compared to Nirvana and Alice In Chains – the former’s set comprised largely of covers and deep cuts while the latter largely avoided their hits – as Pearl Jam perform some of their biggest tracks from their massive debut album, Ten, released the previous year in a stripped-down, bare bones fashion that remains fresh, energized, and, somehow, hard-hitting. It is much like their contemporaries; however, MTV Unplugged is a phenomenal documentation of ‘90s rock and stands among some of the greatest live records ever released. The seven-track live album serves as an incredible depiction of the ferocity, rage, and musical ambition which propelled Pearl Jam to be among the biggest bands of the world within a few short years and remains a truly exciting listening experience from front to back.