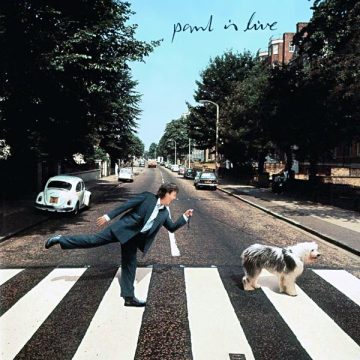 Here we have Paul Is Live, one of four of Paul McCartney’s albums being re-released today. It was originally released in November 1993 and documents McCartney’s 1993 New World Tour. It was a very successful tour, but not too successful as a live album.

Paul Is Live follows the hugely successful Tripping The Lights Fantastic album, released in 1991. It seems odd that Tripping The Live Fantastic is not part of this series of re-releases. Paul Is Live became McCartney’s poorest selling live album, which is a pity as it is extremely good. The cover art, a play on the ‘Paul is dead’ rumours, was perhaps talked about more than the album was heard. The title itself plays on the ‘Paul is dead’, because Paul Is Live.

For this tour, McCartney was accompanied by the band he formed for the 1993 album Off The Ground, which he was promoting on this tour. The band included McCartney, Linda, and Paul ‘Wix’ Wickens ( keyboards, accordion, acoustic guitar, percussion, backing vocals), who continues to play with McCartney and has been part of his band since 1989. This makes Wix the longest standing musician to work consistently with McCartney. The rest of the band included  Blair Cunnigham (drums, percussion), Robbie MacIntosh (guitars, backing vocals), and Hamish Stuart (guitars, bass, backing vocals). This is an especially excellent band and their musicianship is second to none. They are polished, energetic and sound like they are having the time of their lives.

For Paul Is Live, McCartney included some sound check gems, which really make the album worth getting. “Hotel in Benidorm”, “I Wanna Be Your Man” (yes the old Beatle song), and “A Fine Day” are all different, fun and experimental. The rest of the set is taken from the concerts, and here McCartney relies heavily on The Beatles, rather than on his solo material, even though the tour was to promote the brilliant Off The Ground. Over half of the songs are Beatles classics mixed in with McCartney hits and a few select songs from Off The Ground.

This is the first re-release of the 26-year-old album. Unlike his Archive Collection, McCartney did not add bonus material, but rather does a straight re-release available on coloured vinyl for the second time ever, and the original vinyl albums are rare and expensive to find, so fans should enjoy this release of Paul Is Live.