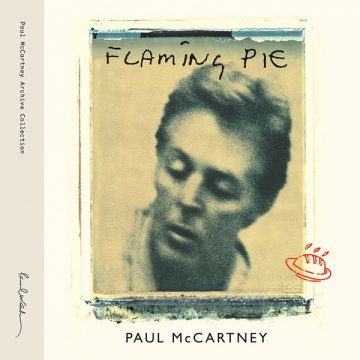 Flaming Pie was originally released in 1997, and was McCartney’s 10th solo album. It was also his first album following The Beatles Anthology, and he was quite clear that working on that monolithic project impacted him. In many ways, revisiting The Beatles influenced him.  McCartney even went so far as to employ George Martin to help him with the record. He also got Jeff Lynne, fresh from producing The Beatles “Free As A Bird” and “Real Love”, to help out with production and McCartney himself produced some tracks.  He also made the decision to work with other musicians other than his backing band at the time, including Lynne, Steve Miller, and Ringo Starr.

Flaming Pie turned out to be not only a commercial success but also a critical one as well. Many critics at the time saw it as a return to form for McCartney. In fact it was a continuation of everything McCartney was working on at the time.

From the opening chords of “The Song We Were Singing” until the very end of the last song, “Great Day”, the album is an incredible mix of all of his influences, and it works on so many levels. McCartney himself, during the album, admits that the shadow of The Beatles was prominent throughout. Listen to “The World Tonight”. “I go back so far, I’m in front of me.” Very honest and that theme carries on throughout the album.

This is a deeply personal album featuring songs written for Ringo Starr’s children following the death of their mother (“Little Willow”), songs to Linda (“Somedays”, “Calico Skies”) and songs about Lennon (“The Song We Were Singing”). It is also a family affair, featuring his son James on guitar and Linda on vocals. Musically, he pulls out all stops. Rock, classical, folk, The Beatles, and blues all get rolled up and placed in the pot.

This new Archive Collection (the 13th in the series) includes many outtakes, demos, home recordings, B-sides and even a song he recorded with Phillip Glass and Allen Ginsberg (“The Ballad Of The Skeltons”). The set comes in many configurations and collectors may want to check out one of the two box sets being offered. As usual McCartney has taken a great deal of care in packaging the set and for those who take the plunge into the box sets, the DVDs contain an excellent documentary as well as promo videos. As a set it is more of an art piece than a collection. It is simply beautifully packaged.