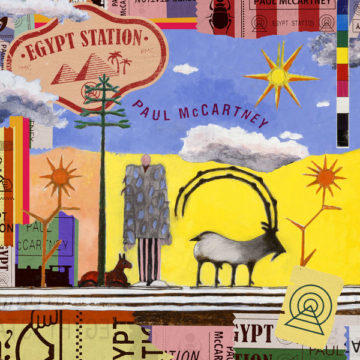 Egypt Station is Paul McCartney’s first album of all new material since 2013’s New. He has issued other music, a retrospective collection (Pure McCartney), a couple of one off singles, and he was  very involved with the recent live Beatles album (Live At The Hollywood Bowl), but this album is 16 brand new songs.  It is also marks 55 years of recording albums. Given his lengthy career, it is amazing that he is able to come up with new material that is contemporary, and in some ways still years ahead, after all these years.

For Egypt Station, McCartney went with Greg Kurstin (Sia, Beck, The Shins) to produce the album, with the exception of the second single, “Fuh You”, which was produced by Ryan Tedder (U2, Adele, Foster The People). “Fuh You” is also the only song McCartney co-wrote with Tedder. McCartney is smart enough to know that, although he has proven himself as a producer, he works best with an outside and objective producer.

McCartney is 76 now, and Egypt Station is an album about looking back, looking at life today and his future.  As with other McCartney albums, he does get somewhat experimental, especially with the opening track (a sound collage inviting the listener into an imaginary train station) and the closing three part track. McCartney has always liked layering sounds and loops (he was responsible for the loops in The Beatles’ “Tomorrow Never Knows”) and let us not forget his Fireman albums and Liverpool Sound Collage (with Super Furry Animals).

While there are some love songs to his wife Nancy (“Hand In Hand”), McCartney also gets topical and political on Egypt Station. Listen to “Who Cares” about cyber bullying and “Despite Repeated Warnings”, a brilliant epic song directed at Trump and global warming. McCartney has come up with some of his best lyrics in his career and to these ears it could be the most personal album in his career. And he writes about peace, “People Want Peace”, moving song he wrote after playing Israel and meeting protesters from Israel and Palestine striving for peace in that region. It brings to mind “Peace In The Neighbourhood” from 1993’s Off The Ground.

Egypt Station shows an artist comfortable with his history and ability, but he is still willing to try new and interesting things. Listen to “Caesar Rock”, and his use of autotune. He is not correcting his voice and going for a hit, but rather using it as an experiment and uses it effectively. He turns it into an instrument and an essential piece of the song. This is creativity. At the same time he delivers a song, “Do It Now”, based on a saying of his father’s as he grew up in Liverpool. The past meets the present on this album.

McCartney, musically, is all over the map on Egypt Stations. Yet he makes it all connect and in the end it is one cohesive album. McCartney has never settled on one genre on any one of his albums, and here he continues the tradition. Blues, rock, acoustic, it is all over the place and it works.

Egypt Station is pure McCartney. No Kanye, no attempt to appeal to kids, nothing but true, honest music. At 76 McCartney is at the top of his game. There is enough on this album to keep a listener glued to it for a very long time. It is a complex album, which means it endures. McCartney has nothing to prove at this stage, hell he had nothing to prove 40 years ago, but he continues to release albums that are thought provoking and songs with which listeners can relate. This is not an album for millennials, maybe they might enjoy it, but an album for people willing to listen to an album from beginning to end, and an album about more issues with aging.

It is an important album, an album that should resonate with the times. McCartney does not flinch with his opinion, nor is he afraid to express himself. In many ways McCartney is content to do what he does best — well crafted rock songs.

Collectors note, there are multiple versions of the album, and later in the year a deluxe set will be released. Basically the album is comprised of 16 songs, but there is an extended version featuring two bonus tracks (“Get Started” and “Nothing For Free”).

Born and raised in Whitby, Aaron discovered music through his love of The Beatles. This led to a career in radio, writing for various publications, and ultimately a radio show about The Beatles (Beatles Universe), which ran for over four years. When not immersed in music, Aaron enjoys spending time with the loves of his life -- his wife Andrea, and daughters Emily and Linda (all of whom have an intense love of music too).
RELATED ARTICLES
album reviewalbum reviewscapitol records
9.0