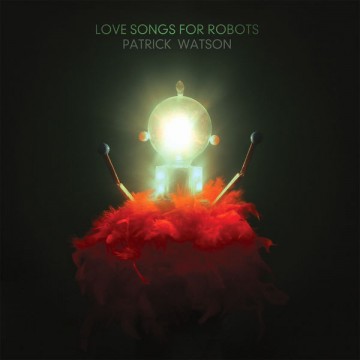 I was first introduced to Patrick Watson in 2012, at Austin City Limits (ACL). I had never heard of him before seeing him on the lineup that year; he was seemingly as unknown as one can be, when appearing at a festival that carries with it the size and importance of ACL.
Love Songs For Robots, the highly anticipated fifth record from Patrick Watson, was released May 12 via Secret City Records. Love Songs For Robots is the follow up to Watson’s 2012 release, Adventures In Your Own Backyard.

We have grown accustomed to watching and listening to Patrick Watson sit at a piano and draw us in with ethereal songs, leaving both us and him breathless with subtlety. While this fifth album does not stray far, it gives more of an experiential feel, as Watson adds synths and electronic parts to complement the guitar and piano.

The lyrics are still highly emotional and exposing, allowing us a further glimpse into the singer-songwriter. As he sings about hope and humanity, each song is carefully curated to take us on a journey of Watson’s seemingly own thought patterns. Love Songs For Robots is perhaps Watson’s most ambitious album to date, taking on deeper meaning as we begin to decipher what the title means – how are we so different from Robots? Is it because we feel emotion and can more fully understand the themes brought up in the lyrics? Or is Watson calling US Robots, blindly going about our days? Is it a further exploration of the (almost overdone) glimpse into humans allowing technology to take over our lives?

Unfortunately, what has made us love and look forward to new music from Patrick Watson is what gets lost a bit on this most recent album. The moody yet uplifting tones of his vocals are often underplayed, hidden beneath too much instrumental sound which seems to go on a bit too long. All is not lost, the title track “Love Songs for Robots” is most reminiscent of the sound we know from Watson and what we would hope to hear on the remaining nine tracks. The third track, “Bollywood,” features a drum machine beat and draws you in simply because while you were expecting an Indian-esque sound, that is not what you get. It is my most favorite song on this album. It keeps a beat that had me paying more attention to it than other songs.

Overall, long time Patrick Watson fans should be pleased, if not a bit confused at times by this album, but it is definitely worth a listen.

Lucy Rendler-Kaplan is a native Chicagoan, recently returning home after 10 years in Los Angeles. Having worked in field marketing for the past 17 years, Lucy recently left corporate America to work as a consultant. When not running, Lucy can most often be found out with her dog, watching an NFL game, or listening to live local music. Passionate about writing, Lucy enjoys writing about music in lieu of playing it.
RELATED ARTICLES
album reviewspatrick watson
7.0