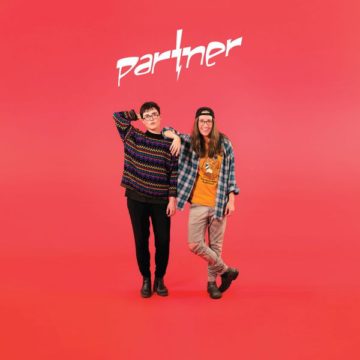 Josee Caron and Lucy Niles, the founders of Partner, met in Sackville, N.B. at Mount Allison University’s meal hall back in 2010. Caron and Niles are both gay, however not for each other (see the song), giving the title of their band a tongue-and-cheek vibe. Partner has been performing since 2014 and have dropped several catchy singles along the way including “Hot Knives” and “The ‘Ellen’ Page”, the latter actually featuring the Canadian actress in the music video.

Taking inspiration from comedy/lo-fi band, Ween, Caron and Niles have interjected this feel of well, for lack of a better word, randomness into their skillfully crafted power-pop. Their Bandcamp page lists intimacy, friendship, sexuality and good old-fashioned drugs as inspiration to their songwriting. There are other influences quite present on Partner’s debut though. Grammy Award winning producer, Chris Shaw, who was contacted by Caron and Niles via email, immediately thought of ‘90s icons, Weezer. He would know, he engineered the emo rockers eponymous 1994 debut LP. Shaw, who has also worked with legendary artists such as Bad Brains, Jeff Buckley and Bob Dylan, jumped at the chance to mix In Search of Lost Time which he has described as “ridiculously good”.

The combination of Partner and Shaw gives the album an incredibly ‘90s feel, sounding like a more lighthearted version of the Breeders, particularly on “Comfort Zone”; while “Play the Field” captures the sound of all of those pop-punk anthems laden in teen movies from the late ‘90s i.e. Bring it On. Even the cell phone ring in “Callin’ Collin (skit)” has a retro vibe reminiscent of that era. It brings cell phones that still have antennas to mind. Ah the good ol’ days.

Despite the album containing 19 tracks, yes that’s right 19, it clocks in at just 35 minutes. Ordinarily packing that many songs onto a single LP is a recipe for disaster, but Caron and Niles have pulled it off with their simply crafted yet energetic power-pop tunes.

As a child growing up in the suburbs, Ryan found music as a way to soothe his boredom. After first hearing AC/DC at the age of 10, he was hooked on music. Tracing its roots to the ‘50s, he became obsessed with Elvis, Buddy Holly and Chuck Berry. Somehow that led to grunge, then psych-rock, then jazz, etc. The list goes on and on and his collection of vinyl records continues to grow.
RELATED ARTICLES
album reviewsin search of lost timepartner
9.0