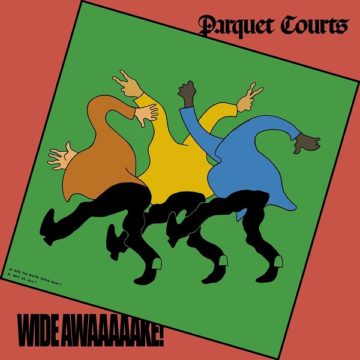 New York based, genre-resistant foursome Parquet Courts are, with Wide Awake!, not only releasing their fifth album in eight years, a rate that maybe only Ty Segall could top, but perhaps also their best to date. This is an album that makes it known from its opening moments that it has something significant to say, and based on their production choices with Danger Mouse at the helm, will spare no genre or metaphor in relaying it to the listener.

The album starts at a blistering pace with both “Total Football” and “Violence” roaring out of the speakers, challenging the listener both lyrically and musically. The latter of the two is a fiery take on the culture of violence active in everyday America that spares no one; in Internet parlance, it is a ‘woke’ kick in the teeth for anyone resistant to the idea that American lawmakers and citizens alike are equally guilty where the cycle of civilian violence is concerned. The first real indications that this is an album with Danger Mouse fingerprints all over it is third track “Before the Water Gets Too High”, an almost western-inspired, down-tempo funk feast. If a funk-flecked slow jam seems unexpected when put up against the first two tracks, there is little that could prepare the listener for “Mardi Gras Beads”, reminiscent of the Beach Boys’ harmonies and laid back instrumentation. Acutely aware of how off-kilter you are by this point, the band then launch into another up-tempo guitar-driven Parquet Courts classic, “Almost Had To Start a Fight / And Out of Patience”. The rest of the album follows a similar pattern – tempo shifts as frequent as style changes, conflicting genres abutted up against each other that are somehow held together as much by the lyrical relentlessness of lead-singer Andrew Savage as by the glossy production and chameleon-like ability of the band.

In all, Wide Awake! is a challenging but incredibly rewarding album that will, like the album released this week by Courtney Barnett, appear on many year-end lists. It is an album with restlessness at its core; when paired with one of the most dynamic producers on the planet and built upon a solid punk rock aesthetic, there is little surprise that this album is both such an enigma and such a clear triumph.

Br. lives in southern Ontario, grew up on The Beatles and The Journeymen, spent his adolescence immersed in grunge, and his adulthood in British alternative. His greatest joy is seeing his son dance and grow into his own appreciation of the indescribable joy of music...
RELATED ARTICLES
album reviewsnew musicnew release
9.0