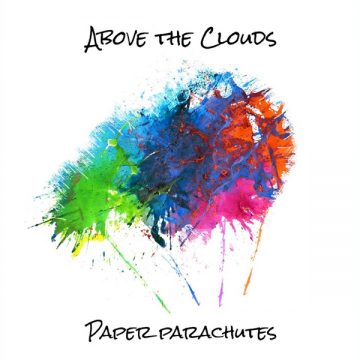 Paper Parachutes
Above The Clouds
Independent

With Sabre taking over on lead vocals, Toronto’s most promising up and coming funk and soul band, Paper Parachutes, have returned with their third release. Above The Clouds is a five-song EP which follows their 2018 sophomore release, No Bad Days and sees the band elevated to a higher level of sophistication in both songwriting and performance as they seamlessly blur the lines between funk, pop, neo-soul, and Motown.

Opening with the warm and fuzzy crackle of “Desert Rose”, already, despite their use of modern tones and style, Paper Parachutes establish themselves as reminiscent of flipping through crates of nostalgic vinyl. The weaving nature between Simon Chow’s guitar and Harley Vanselow’s sax is truly exceptional with Sabre’s lush, breathy, yet powerful vocals standing prominently on the foundation of the band. With vocals comparable to Amy Winehouse, Sabre truly has brought a sense of invigoration to the band in their latest incarnation with her voice taking a special spotlight across the length of the record. “Desert Rose”, as the lead single for the record, stands as an excellent opener that establishes the tone and pace of the EP with funk rock/pop banger.

Paper Parachutes continue to prove their versatility on Above The Clouds with the Latin-inspired sway and samba of “Sandcastles”, and “Cabriolet”, both a melodic and groove odyssey full of shifting pulses and rhythmic flair. The slow and sultry funk, however, of “Be One” may be among the strongest of the record as the band creates a deep groove that teeters between Hendrix and the Chili Peppers with Sabre’s incredible vocals front and centre. The song features some subtle, but amazing guitar work from Chow, a jazzy sax solo, and, again, I can’t stress enough how tight the groove set by drummer Wesley Small and bassist Brian Bonner – on this track and the rest of the record – stands.

Coming to a close with the slow-burning ballad “Mona Lisa”, Paper Parachutes flex some of their strongest songwriting chops with a funk rock ballad that grows tastefully throughout its length. It is clear that front to back, Above The Clouds is an EP that speaks for itself as an incredibly strong and original collection of music from a band who should be revered at the top of Toronto’s musical community. Seemingly effortlessly, the band has come into their own with a focused, cohesive, and daring record that demonstrates their worth as funk, rock, pop, and soul pioneers of today. On Above The Clouds, Paper Parachutes have found their sound.