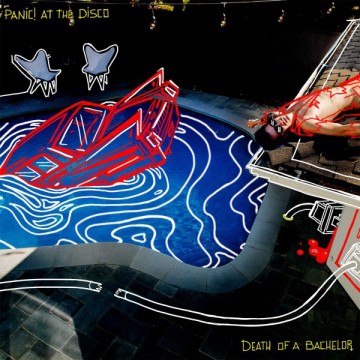 Panic! At The Disco
Death Of A Bachelor
Warner Music Canada

In all of their weirdness, Panic! At the Disco have hit their stride multiple times. Since “I Write Sins Not Tragedies” had its time in the sun, the band has fluctuated throughout a multitude of sounds. Most notably was the clearly-inspired-by-The-Beatles record Pretty.Odd. The sophomore record still stands as the band’s greatest feat, not relying on their preset niche of catchy, quirky pop. A fine balance was achieved on the previous effort Too Weird to Live, Too Rare to Die!, which was mainstream enough to make waves yet creative enough to have lasting quality.

Death Of A Bachelor somewhat manages to continue on in this vein. Lead singer Brendon Urie is headed toward the altar, and this record acts as his final sendoff to single life. The theme, admittedly, seems like something Panic! At the Disco would have no issues working with. But from the chanting lead single and opener “Victorious,” it’s clear the band is still attempting to appeal to a younger audience. That irritating, childish chanting can’t save the track from sounding like a half-winded “Backstreet’s Back” revival. Other tracks that miss the mark entirely include “Don’t Threaten Me with a Good Time” which preaches ingesting “champagne, cocaine, gasoline and most things in between; and “Emperor’s New Clothes,” having virtually no redeeming qualities. Strangely enough, strikingly mature songs on the same record irrefutably contrast these childish tracks. The standout “Crazy=Genius” definitely shouldn’t find itself tucked next to the aforementioned misfires. Wonderfully exemplifying why the band’s uniqueness is so appealing, the song plays out like an ode to 1920’s swing and jazz. The title track follows suit, proclaiming a Sinatra-like inspiration, veiled in Urie’s wacky pop signature, the likes of which are also present on the closer “The Impossible Year” and the album’s centerpiece “L.A. Devotee.” Not only do horns and strings helpfully uplift many songs on the record, but they somehow fit well with all the old school Panic! At the Disco representations. Additionally, the lyrics on the record are fairly poignant when they need to be. If you roll over the ignorantly childish dribble in some of the early stages, wonderfully coy jabs show themselves throughout.

Somehow, Panic! At the Disco is still making impressive music. This should be marveled at, since bands of their caliber tend to fade quickly. However, it’s their affinity to creating preteen angst-pop that continues to weigh them down. Even if, on their records, they’re producing memorable material, it’s the marketed illusion of their craft that hinders their full maturity. And while they’re seemingly content with their stunted growth, a full foray into entirely new territory, such as that of Pretty.Odd., is really the only chance they will have to make real waves again. For now, though, Death Of A Bachelor is satisfactory.

Robert Defina is an avid critic both on paper and in person. He spends more time writing album reviews than he does worrying about his future. He hopes that this sort of procrastination never grows old.
RELATED ARTICLES
album reviewsfueled by ramenpanic! at the disco
8.0