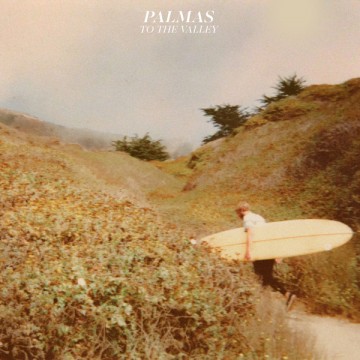 On their swinging debut, Philadelphia indie band PALMAS shake and shimmy to their inventive blend of sunny Californian rock with some modern, alternative rhythm. The six-track release starts off with a thirty second ode to garage band grunge, “Buzzcut”, and explores different sounds from then on, never quite leaving its rock origins but balancing some new influence in the mix. In commitment to its oceanside theme, noticeable by the album cover’s surfboard inclusion, this release works as an introduction to a Beach Boys-style revival. PALMAS appear confident in their comfort zone with swaying electric guitars, rattling percussion and radio-static, muffled vocals. All three elements are largely in control on all of the tracks, forming the basis of this band’s identity. At times, this causes a static appearance for the rockers, who seem to only be willing to conquer one genre, despite their six-track opportunity to showcase their versatility. In other moments, they grasp the opportunity to be as playful about their old school sound as possible. The EP’s closer “San Francisco Bay” is produced to sound like a live television performance, transmitted through the kind of old set that probably has giant buttons that change the channel. But even when you flip to the other tracks you’ll find the same boogie with a different story. The lead single “I Want to Know (Your Love)” exudes the most current tone here, steadily downplaying its bravado to make it a piece of the larger puzzle instead of forcing it to stick out like a sore thumb. Its catchiness, though, will likely land it in a future Old Navy commercial.

From start to finish, To the Valley works as a smooth surf over stable tides. It’s truly the handle that PALMAS have on the genre they are so effectively imitating that makes To the Valley more than just a simple attempt at a debut EP. From top to bottom, the record rarely falters. While you may not be able to notice many differences between the tracks at first, you can guarantee that you will know who PALMAS is. It should be interesting to see how these old school rockers handle a larger wake when their inevitable debut washes up to shore.

Robert Defina is an avid critic both on paper and in person. He spends more time writing album reviews than he does worrying about his future. He hopes that this sort of procrastination never grows old.
RELATED ARTICLES
album reviews
7.0