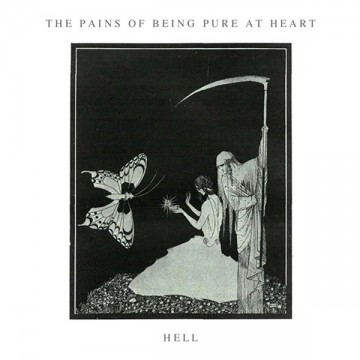 The Pains of Being Pure At Heart
Hell
Yebo Music

Packaged as a sort of afterthought, The Pains Of Being Pure At Heart’s Hell EP is a pleasant three-track offering from the New York band.

The title track is ostensibly about “how insufferable performances of sensitivity are when there’s a good song playing and someone you want to dance with.”

In other words, bandleader Kip Berman is trying to get laid, and you’re really bringing down the mood.

But Berman’s seeming admission of insensitivity sure is catchy. “Hell” is a jovial little new-wave-y tune trickled with slap back guitars and Berman’s yelps reminiscent of Television’s Tom Verlaine.

The two cover songs, “Ballad of the Band” by Felt and “Laid” by James (sung by A Sunny Day In Glasgow’s Jen Goma), are both casual offerings and sound like a seasoned band who are kind of tired of playing their back catalogue every night and would rather dick around with some old favourites in the studio.

The Hell EP doesn’t showcase the band covering any new ground. “Hell” was originally intended for (and would have fit quite well on) their last full length, Days of Abandon, and the covers are the equivalent of a powerlifter effortlessly lifting a barbell: they’re well-executed, but predictable.

Marko Woloshyn is a Mississauga-based writer and musician. He owns a limited edition repressing of Mclusky Do Dallas and one time at a concert a drunk woman told him he looked like Keira Knightley.
RELATED ARTICLES
album reviewsthe pains of being pure at heart
9.0