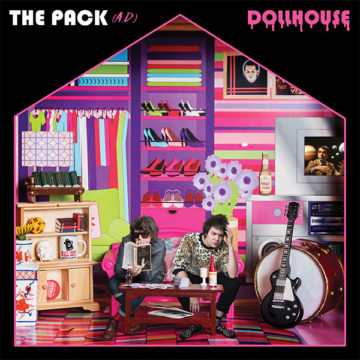 Strange and eerie is the overall feel of The Pack A.D.’s latest album Dollhouse. This should be no surprise as it provides comments on our current political, violent state of living. Dropping on October 13th, Dollhouse consists of nine tracks of weird musical beauty from the Canadian female duo.

The album kicks off with a surf-rock meets grungy-sounding track “Woke Up Weird”. Setting the tone for the rest of the album, this track lays down repetitive lyrics in minor keys and deep vocals over top of distorted guitar and cymbal-heavy drums.

Title track “Dollhouse” features the gloomy vocals of lead singer/guitarist, Becky Black with tight, slow beats from drummer Maya Miller. The lyrics, always brilliantly simplistic manage to comment on our current state of earthly turmoil in as few words as possible. The punk vibe on this track is ,with a slow tempo making for a really interesting sound.

Moving through the album, “March of the Martians” is a futuristic sounding clip sans vocals with an experimental guitar sound used as segue. While it isn’t a long or dominating track, it’s definitely worth commenting on as it is fantastic for its ability to draw you in.

The album calms down significantly at track seven, “Because of You” and continues to do so until the very last song “I Tried”.  On the former, Black sings out in a gravelly voice, slowly bringing the listener in for a climax of volume towards the end before bringing it back down with a simple riff. The latter, “I Tried” features a higher sound from Black who softly brings her voice up and down saying simply, “I Tried”. This song feels deeply helpless and sad.

Overall, Dollhouse is a solid addition to The Pack A.D.’s discography that taps into a melting pot of emotions from anger to sympathy, struggle and defeat. Working hard to distinguish themselves from other duos, The Pack A.D. has used this album to carve out a unique sound for themselves in the rock world.

Gabrielle Bossy is a lover of all things music, writing and charcuterie boards. Gabrielle has a particular passion for music of the 1960s and the hippie movement in Toronto’s Yorkville district. Gabrielle runs her own music website, The Hippie Historian, where she reviews concerts, interviews musicians and writes about music history that spans the ages.
RELATED ARTICLES
album reviewscadence musicdollhouse
8.0