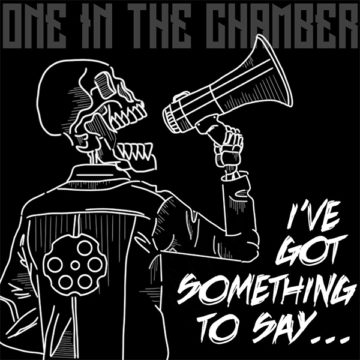 One In The Chamber
I’ve Got Something To Say…
Independent

I’ve Got Something to Say… is One In The Chamber’s debut studio EP. They have released a live mini album (Live At The Rockpile)  and an EP of demos (The Boston Session: Bootleg Demos) in 2017 and both were extremely well received. After hearing their first two releases, I, for one, was looking forward to a studio recording from the band to see if they could replicate their energy in the confines of the studio. I needn’t have worried or even questioned their ability. One In The Chamber has come up with an EP jammed full of energy, drive and heavy rock ‘n’ roll.

One In The Chamber is made up of  Mike Biase (lead vocals and guitar); Cecil Eugene (lead guitar and backing vocals); Christian Dotto (bass) and Gerrod Harris (drums and backing vocals), and the years of playing the clubs have helped this band not only develop their own sound but form a tight unit. Sure, they have their influences and at times the influences come through, but it is how these influences are incorporated into to their music that makes the band unique.

Listen to the song “Something To Say”, great use of guitars and sounds prior to vocalist Biase coming in with the statement “I’ve got something to say” and he proceeds to say a great many things in four and a half minutes. Musically it is a burst of energy, lyrically it is a loud, angry yet thought out song.

For an EP, there is a great deal of variety. It is one genre, heavy metal,  but One In The Chamber explores within that genre. Listen to “The Ballad Of Captain Jack” that begins as a fairly laid back song, but grows and builds. It produces a very dramatic effect and it is quite effective. These guys know what they are all about.

Murray Daigle takes over the production and mixing controls and knows how to record this band. His years of experience with the likes of Platinum Blonde and Serena Ryder has taught Daigle a great deal about getting the best out of an artist or group, and he does that here. He lets the band do their thing but has assisted them in honing their sound.

Fans will love this EP, but I think this is going to gain them many new followers. The songs are perfect for live shows and they have their own sound. What more do you want? One In The Chamber is a brilliant band and I am glad they have something to say.

I’ve Got Something To Say… is an impressive studio debut. One In The Chamber is doing everything right. They got their sound down, perfected it performing live, and are now in the studio faithfully representing their music in the best way. The EP rocks, and grips the listener from beginning to end. It is a thrill ride from beginning to end and it is one of those records which one wants to begin again once it is finished.

Born and raised in Whitby, Aaron discovered music through his love of The Beatles. This led to a career in radio, writing for various publications, and ultimately a radio show about The Beatles (Beatles Universe), which ran for over four years. When not immersed in music, Aaron enjoys spending time with the loves of his life -- his wife Andrea, and daughters Emily and Linda (all of whom have an intense love of music too).
RELATED ARTICLES
album reviewalbum reviewsi've got something to say...
9.0