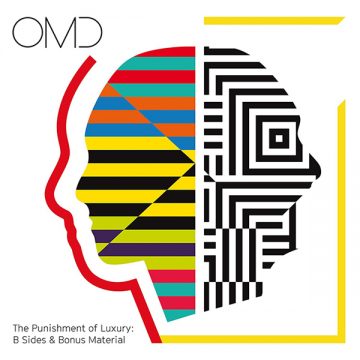 OMD (Orchestral Manoeuvres In the Dark)
The Punishment of Luxury: B Sides And Bonus Material
White Noise Records

The Punishment of Luxury by Orchestral Manoeuvres In the Dark (OMD) proved to be their biggest album in 16 years, peaking at number 4 in the Official U.K. Album Charts. This is quite an accomplishment for an independent release with minimal radio coverage. The Punishment of Luxury is a brilliant album, one of OMD’s best. The band released three singles from their new album: “Isotype”, “The Punishment of Luxury” and “What Have We Done”. In accordance with their previous single releases there were various versions of the songs and non-album B-sides.

The question many would ask is “is this necessary?” Maybe not, but it is nice to have these excellent remixes and singles on one album. “Lamp Licht” (originally found on the Punishment of Luxury single) is one of those songs that would not have necessarily fit on the album, but is stunning and well worth listening to. Again, OMD does things with sounds and textures that few can replicate, and their latest release is an excellent example. “Skin” (from the “Isotype” single) would have fit, but it sits beautifully on the single. The newest track, “HAHAHA” (from the “What Have We Done” single) sounds equally at home in this collection and demonstrates OMD’s willingness to expand their universe.

And then there are the remixes. It is easy to remix a single and lose the original beauty and melody of the original. OMD have historically released brilliant remixes that keep the original melody and structure of the song but have lengthened the song. Some of their remixes are designed for dance, while others are extensions of the song that would not fit on the original album. To my ears, the latter is the case for the “12 inch Extended Mixes” for the singles. The other remixes are more geared to DJ plays in clubs, while the single edits demonstrate their ability to take an album track and mix it for both single and radio markets. Listen to “Isotype” on The Punishment of Luxury and then compare it to the single mix as an example. The song is similar, but it is shortened and mixed to increase accessibility. This does not detract from the song, but rather allows for the song to be presented differently.

The Punishment Of Luxury is one of the best albums of the year, and I think it will go down as one of the best albums of this decade. OMD returned in full force with that album, and this companion is a perfect catch all of other material recorded and released by this remarkably talented band. In their forty years together they have learned a great deal and present classic albums. The Punishment of Luxury: B Sides and Bonus Material may not be essential, but it is worth having. Fans will want it for the songs they may have missed, but it sits as its own album as well. Brilliant work is brilliant work, and this album, much like the mothership from where it came, is just a superb album to be listened to and enjoyed.

Born and raised in Whitby, Aaron discovered music through his love of The Beatles. This led to a career in radio, writing for various publications, and ultimately a radio show about The Beatles (Beatles Universe), which ran for over four years. When not immersed in music, Aaron enjoys spending time with the loves of his life -- his wife Andrea, and daughters Emily and Linda (all of whom have an intense love of music too).
RELATED ARTICLES
album reviewsandy mccluskeymalcolm holmes
9.0