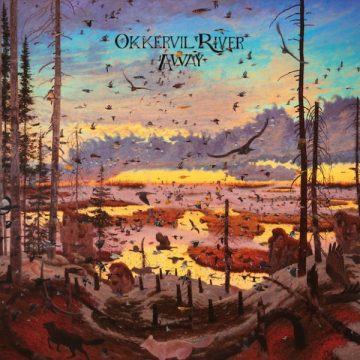 Okkervil River’s newest album, Away, is ambitious but it may have overshot the mark. There is no bad song on the album but there are lots of forgettable tracks. Almost every song is too long and the album is missing some of the high energy of Okkervil River’s earlier releases. That being said, there are a few good songs and some songs that could have been great, most likely if they were a couple minutes shorter.

“Okkervil River R.I.P.” is the first track on the album. It is laid back but pointed, has some great lyrics and a really fantastic united feeling throughout the musicians but at six minutes and 41 seconds it is also the first of the songs that could have been shortened. The second track on the album is longer but earns the time it takes. One of the best songs on the album, “Call Yourself Renee,” is slightly more than seven minutes long but it is pleasant and engaging. Almost trancelike at moments the instrumentalists have some wonderful moments to show off during the track and Will Sheff seems very at home working with the rambling melody of the song. “The Industry” is the shortest track on the album, at four minutes and 31 seconds. Sheff makes some interesting comments during “The Industry” and it is one of the more energetic songs on Away. “Judey on a Street” does some interesting things with echoes on Sheff’s vocals but it is hard to retain interest in the lyrics. The instrumentalists on this track are wonderful and the arrangement is beautiful, making it very easy to get lost in the keys and other percussion while forgetting Sheff almost entirely. “Frontman In Heaven” is nearly eight minutes long and incredibly repetitive, melodically. The first couple times the harmony joins Sheff’s vocal line is a bit of a relief but as it is nearly eight minutes long, eventually the harmony just becomes part of the seemingly endless circuit that “Frontman In Heaven”’s melody runs through over and over. At three minutes the song seems like fun but after that watching the seconds tick up towards the end of the song is like watching water boil. “Days Spent Floating (In The Halfbetween)” is an excellently arranged track with fantastic instrumentals. The titular phrase may be repeated a little too often, making the song again longer than needed, but it is a great end to the album.

Some of the songs off Away could have been great tracks if edited down a bit and spaced throughout a few different albums. The greatest moments on Away are very interesting lyrically and are beautifully arranged but the worst moments on Away are exhausting and much more common. The tragedy is that in the album’s vast, trance-like arrangements the audience loses sight of the most interesting thing about Okkervil River: Will Sheff himself.

Daniel Mallett is a young journalist from London, Ontario pursuing a career in arts and entertainment writing. He enjoys music, theatre and visual arts and hopes to learn as much as possible about the artists working in Canada today. Mallett is also one half of the Toronto based folk duo Howl & Other Problems.
RELATED ARTICLES
album reviewsato recordsaway
10