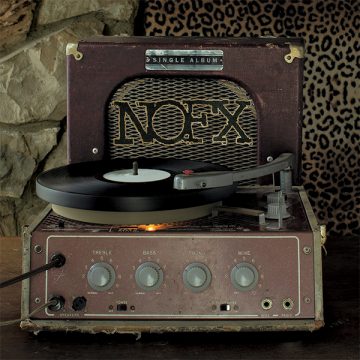 NOFX is still around 40 years since their early beginnings, and what is there left to do when the rest of their era’s punk bands have fallen or sold out? Well, you can begin an album with a six-minute mid-tempo song called “Big Drag” about getting old and fighting on through a terrible life. This is where the intrigue for the listener immediately begins. One might think, “Is this a happy or sad version of NOFX?” – and it is definitely the latter. Things get more awesome in a punk way with the aptly titled “Fuck Euphemism”. Singer Fat Mike chronicles his sexuality, which I am glad he can finally discuss freely. This song has a Ribbed record feeling that doesn’t go unnoticed. Another song “Fish in a Gun Barrel” is a Reggae song about mass killing and is just as hooky without becoming too preachy. This is where NOFX shines on this album; mixing politics, sexuality and drug use while making the songs listenable albeit in a very dark experience.

El Hefe and Eric Melvin are shining as always as the dueling guitar and background vocals. For me the crowning achievement on the album is the song “Linewleum” which takes NOFX’s most famous, covered 25-year-old song, and remakes it. They are remaking it to kill it off while shouting out all of the bands that have covered it. It is a cool move. An exceptional song that needs mentioning is “My Bro Cancervive Cancer”. Dark yes but so catchy and the So Cal Skate Punk vibe is refreshing to hear from them again. The album finishes with “Your Last Resort”, delivering lots of piano and a blistering end which will surely become a live show favorite. It is technically the band at their peak. And that’s an expression that honestly sums up this release. Still at their peak as always.

SPILL FEATURE: IT MAKES FOR GOOD MUSIC – A CONVERSATION WITH FAT MIKE OF NOFX

Ex-pat living in Geneva, Switzerland from the hard streets of Baltimore, Maryland. Ex-radio-monkey and avid listener of all things that are supposed to be cool.
RELATED ARTICLES
album reviewalbum reviewsfat mike
7.0