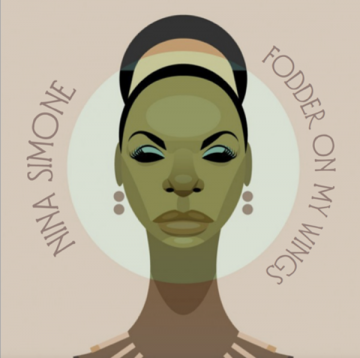 Nina Simone had one of the most beautiful and distinctive voices in Jazz/Gospel, or indeed any other genre. It transports you into the jazz club, with Simone delivering timeless tunes that enter the heart and stay there. This album, recorded during her stay in Paris in 1982 covers soul, jazz and with even a hint or two of calypso. For this reviewer, anyone who gave the world “I Got Life” cannot do wrong, but this release of a later and less known album comes as a fresh look at the singer during more troubled times for her.

During the recording of the album Simone suffered from mental illness and was reportedly lonely; there is such pain in the lament for her father “Alone Again (Naturally).” There is a tiredness in her voice that alludes to the sorrow. Yet this is not a sad album, “Liberian Calypso” is highly autobiographical, yet resonates with piano and a beat that will have the world dancing along with her again. In similar fashion, “I was Just a Stupid Dog to Them” has a brightness of beat that belies the bitter subject matter. It is a deeply personal album that Simone herself valued, but it has remained hard to find and in the more obscure corners of her catalogue; thus, this release is long overdue.

It is not just the voice, her piano sparkles often, especially in “Le Peuple En Suisse”. It is an album that was conceived by Simone and her stamp is all over it. She is seemingly energised by a new group of African heritage musicians that she met up with in Paris, and the result is an eclectic album that moves from singalong to painful ballad.

If you are new to Simone, check out some of her earlier material first; but for Simone fans this will be a wonderful addition to her collection of available work. It will be listened to over and over again.