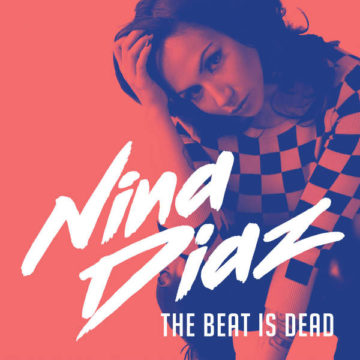 The fierce and electrifying Nina Diaz is perhaps best known as the frontwoman of indie rock band Girl in A Coma. After almost a decade of touring, she recently took an extended break to develop a solo career. This puts her in a unique position: getting to manifest her energy, passion, and life experiences however she wants. And she does exactly this in her debut album, The Beat is Dead, a powerful near 50 minute personal journey through relationships, addiction, and death. Her clean-cut and unyielding vocals backed by simple synth and rock-pop production are not only a perfect fit for such an emotional display, but also evoke images of ’90s girl grunge bands shouting words of female empowerment.

The opener and lead single, “Trick Candle”, lures in the listener with Lady-Gaga-esque synth-pop, head-bobbing bass lines, and a catchy hook, but with little lyrical depth. The next track, “Queen Beats King” slows things down and opens the story of Diaz’s struggles with addiction, featuring the line that gives the album its name, as well as another of its most powerful lines: When you breathe in the silence / you create your own violence”. It’s apparent from the outset that Diaz accepts that she has made detrimental choices, but she begins to channel this energy towards self-healing and empowerment in the middle of the album with “Rebirth” – opening the song by shouting that she is back from the dead – and “January 9th”, where she unpacks the darkness of her recent past and shows a renewed determination after her grandmother’s death.

The album loses some focus in the middle, with a couple of soft-rock standard love songs, before dipping back into her familiar grunge-inspired synth sound with “Screaming Without a Sound”. This track is especially powerful as she lays before the listeners her instances of relapse and self-sabotage. The album’s final songs are a tangent from the rest of the album, with a softer acoustic and blues-inspired sound that may not stick for a casual listener, but nevertheless digs deep into her physical and mental recovery. “Star” deals with her inner conflicts and conversations she had with herself on the road to recovery, while “For You” is about her spiritual healing. In an interview with the Austin Chronicle, Diaz states her healing ultimately transpired through spirituality, and the latter track delves into the wholeness she felt throughout the final steps of her journey.

Overall, The Beat Is Dead is a rhythmical and emotional debut album that truly underscores the emotiveness of music. Even the most timid person will want to move their body or mouth some lyrics. From her carefully crafted guitar and synth sounds to her flinty lyrics, this album offers a relatable song with intense introspection for every listener.