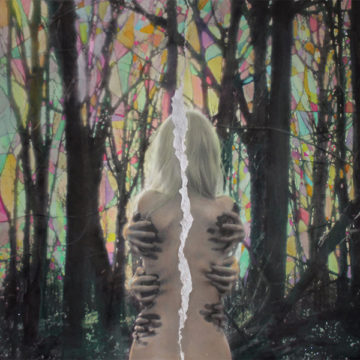 Straight out of Cleveland comes NIIGHTS with their second album (Whisper being their 2015 debut). And since Whisper, NIIGHTS have come a long way. The core of the four piece are Jenna Fournier (vocals) and Frankie Maraldo (guitars). Joining them on this album are Jeremy Dodge (drums) and Jacob Chandler (bass, synthesizer).

This is a great album. NIIGHTS identify themselves as ‘shoegazing’, which is a pity because there are aspects of that genre, but there is so much more. Their playing is very tight, and quite good. Even more impressive is the fact that they have incorporated two new members, half the band, into the group. Quite an accomplishment to achieve the sound they have with new members.

Musically, it is a very interesting album. Maraldo provides some very innovative guitar playing throughout the album, such as in “Sylvia”, which is more prog rock than shoegaze and his playing is flawless. The instrumentals on the album, although short, also add a great deal due to the exquisite playing.

“Stars” has Fournier  channeling Cocteau Twins, but unlike the Cocteau Twins,  she sings  in English.  She is also quite a lyricist. Some of the songs are run of the mill unrequited love, but when she delves into herself and other aspects, she produces some fine words. Listen to the last song on the album, “Caterpillar”.

“I’m not myself today. From the ground into the clouds and back again, there’s a cloud of smoke inside my head.”

Well expressed and it fits with the music perfectly. The album would have benefitted from more of these moments.

Hellebores are flowers, and this album really demonstrates a band blossoming and coming into their own. They really should be less concerned with labels (i.e. shoegaze) and stay focused on producing the music that they want to issue. This is an exciting time in music, with the independent labels signing very original and talented bands. Niights fits that bill and I think this album is merely an indication of greater things to come.