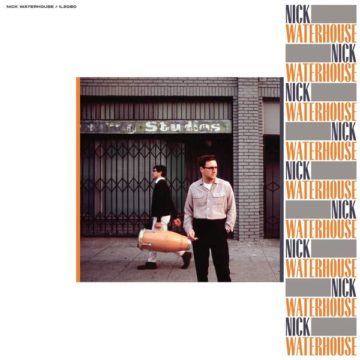 Nick Waterhouse delivers a nostalgic crush with his fourth studio album, the self-titled LP Nick Waterhouse. The album itself is 11 songs of the purest surfy, bluesy, rock ‘n’roll. This sound is long forgotten, seemingly extinct in this day and age – and every song on this album is a masterpiece of composition. Each track, a meal with 100 courses–and oh, so freaking sweet. It’s kind of impossible to think that Mr. Waterhouse is only 33 years old, and that this album isn’t some unreleased gem from the ‘50s. It would be more believable to see his music credit on the soundtrack of The Sandlot, or that he opened for Chuck Berry in 1958 and they played Wreck the Rod as the encore in some high school auditorium with hundreds of screaming teens in wing tipped glasses and blue suede shoes. The angst in his voice, combined with the stepping throws of a saxophone and electric guitar shine the brightest early on, with Song for Winners and I Feel an Urge Coming On. Realistically though, the first six tracks of this album hit hard, the tempo slows a bit with Which Was Writ – only to compare the delivery from an unimaginable live act to what sounds like a song for studio. As if the band needed an intermission, to catch their breath – to give the audience a chance to kick off their shoes and prepare themselves for oncoming whiplash, soreness and satisfaction of an already amazing set. This album is everything for the unsuspecting, a historical monograph of time before time, a perfect album from beginning to end.

Originally from NJ, Nicholas is an architect residing in Toronto. His most memorable moments in music: Crying during Roger Waters set at Newport Folk Festival, Nas performing all of Illmatic at Governors Ball, and Manchester Orchestra performing Cope in a church in New Haven, Connecticut.
RELATED ARTICLES
album reviewalbum reviewsinnovative leisure
9.0