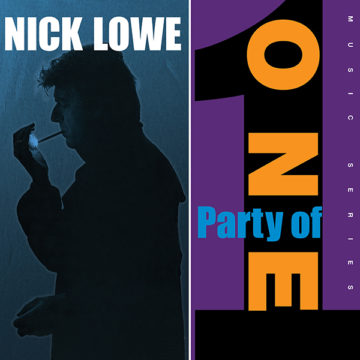 Party of One is a classic Nick Lowe album that has been out of print for a number of years. The fine folks at Yep Roc are correcting that situation and have reissued the album (along with five other Nick Lowe titles that have suffered the same fate). This reissue also includes bonus tracks, and a crisp new sound.

When Party of One was originally released in 1990, it was the end and the beginning of two distinct eras in Lowe’s career. He had left his long time label (Columbia in the U.S. and Canada) and signed to Reprise. At this point, he began to move away from his ‘pub rock’/’rockabilly’ roots and moved into more, for lack of a better word, jazzy mainstream. His guitar work changed as well as the players with whom he worked.

Old friend Dave Edmunds plays guitar and produces the album, but on this album you have Jim Keltner on drums (great choice), Bill Kitchen and Ry Cooder on guitars and Ray Brown on bass on one song. This album would also lead to the formation of Little Village, a group Lowe was part of featuring Ry Cooder, John Hiatt and Jim Keltner. After the Traveling WIlburys, ‘supergroups’ popped up everywhere. Some worked (The Notting Hillbillies) and some didn’t (Little Village).

But listening to Party of One, you can detect a shift in Lowe’s writing. This is one of two albums in his catalog where he wrote (or co-wrote) every song on the album, and there are no covers. For the record, the other album is 1982’s Nick The Knife. Sure some of his humour surfaces (“All Men Are Liars”, a genuine hit single for Lowe), but this album has a more serious tone. Party of One is musically a more serious album for Lowe and the beginning of his ability to be much more introspective and musically exploring his life.

Listen to “I Don’t Know Why You Keep Me On”, “Every time I try to picture your face, nowadays I see an empty space.” Perfect poetry and some of his finest lyrics/observations ever. And the music for the song is equally inspiring. Granted it is a bit more of a slicker sound for Lowe, it fits the mood and tone of the song and album.

Perhaps most importantly, this album paved the way for Lowe to really expand and produce albums such as Dig My Mood, The Convincer and At My Age. In other words, it was a logical next step but it also allowed him to grow up as an artist and human.

Lowe’s 80’s output has always been overlooked, and I am glad Lowe and Yep Roc have reissued his albums released during that decade. Each album is a stepping stone and for me it is fascinating to watch an artist grow.

As with the other releases in this reissue series, there are bonus tracks. They neither add nor detract from the original album. The demos (“Rocky Road” and “Don’t Think About Her” ) are interesting to see how the songs developed, but they are not that necessary, other than for the compulsive fan.

This is a strong, well put together album. The songs have stood the test of time, and the remaster does bring certain sharpness to the album. Lowe’s voice is perfect and there is a sense of intimacy on this record that Lowe started to experiment with on his albums. Party Of One sounds as relevant today as it did in 1990, maybe even a little more relevant. It is an example of an artist who closed the door on one decade, and paved the way for his next stage.

Party Of One is well worth revisiting. It is one of those albums that has been forgotten over time, and I think the time is right to dig into this collection of introspective, sometimes funny songs by one of the greatest artist of the past four decades.

Born and raised in Whitby, Aaron discovered music through his love of The Beatles. This led to a career in radio, writing for various publications, and ultimately a radio show about The Beatles (Beatles Universe), which ran for over four years. When not immersed in music, Aaron enjoys spending time with the loves of his life -- his wife Andrea, and daughters Emily and Linda (all of whom have an intense love of music too).
RELATED ARTICLES
album reviewsnick loweparty of one
9.0