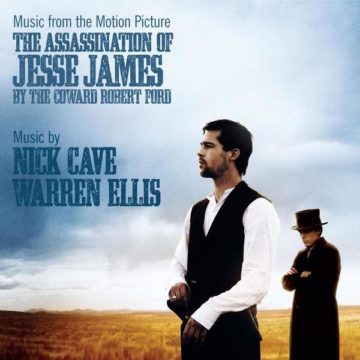 Nick Cave and Warren Ellis have re-released their critically-acclaimed soundtrack Music from the Motion Picture: The Assassination of Jesse James By the Coward Robert Ford.

While the original soundtrack was released on CD in 2007, the skillfully remastered version is aptly pressed on whisky-coloured vinyl. Upon its first release, the soundtrack marked the second collaboration for film between Nick Cave and Warren Ellis.

The pair have been creating intensely affective music together since the ‘80s as the driving forces behind Nick Cave and the Bad Seeds, and Grinderman. They are no strangers to creating an emotional response in listeners, and this album is no exception. It is perhaps one of their most poignant, excruciatingly beautiful collaborations.

Dichotomous tracks “A Rather Lovely Thing” and “Another Rather Lovely Thing” showcase the versatility of songwriting on the album. Based on the same hooks, the latter is much darker and ominous than the other. “The Money Train” is menacing and brims with rich cello. “Cowgirl” features waltzy guitar and sensual violin. But the standout track is the last one, “Song for Bob,” where heartache is transcribed into musical notes.

Back in 2007, the soundtrack elevated the film to something graver and more elegant than an average Western. That fans were eagerly awaiting its release on vinyl speaks to how it stands alone as a masterful piece of work.

Music from the Motion Picture: The Assassination of Jesse James By the Coward Robert Ford is not an album to put on in the background. Spin this album on a stormy night, augmented with a glass of whisky, and get lost in its dark, elegant nuances.