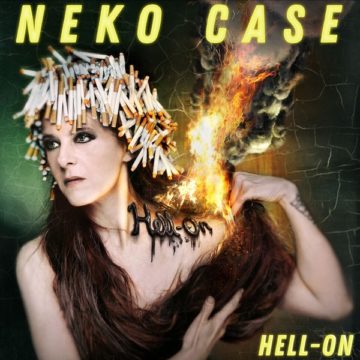 Call it hyperbole, call it what you will, but Neko Case is a national treasure. Though likely made known through her work with the New Pornographers, it has been her work as a solo artist that has set Case apart and in an already impressive career, it is no more hyperbolic to say that Hell-On may be her finest work to date.

Though there is much to love about Hell-On, it is Case’s candour that stands out the most; truly, she has had a hellacious few years including dealing with depression, a stalker, and the loss of her house to fire, and yet this is not an album mired in loss or darkness. Case tackles her demons head on, both personal and those framed around modern male hegemony, and does so without flinching, but also without succumbing to what may have swallowed whole a less determined mortal. There are without doubt some big questions being asked on this album, but they are framed within a very clear awareness of humanity and fallibility, both that of Case specifically (most notably “Curse of the I-5 Corridor”) and of our society as a whole.

While it is her candour that is most arresting, only slightly less so is the simple beauty of much of this album. These are songs that are much more layered and tightly-knit than Case’s past efforts and the presence of synths as an under-current (never stealing the spotlight) is very effective. Further, Case has brought in an absolutely all-star cast of musicians and vocalists to both write and perform with, in addition to her already abundantly talented crew of consistent collaborators. Perhaps a little predictably given their history together, Carl Newman and Joe Seiders of the New Pornographers appear, but it is the inclusion of Laura Veirs and KD Lang, who recently recorded and toured as a threesome including Case, as well as Mark Lanegan and Beth Ditto that really allow many of the songs to swell and rise towards moments of memorable beauty. Lanegan’s gravelly timbre on Case’s autobiographical “Curse of the I-5 Corridor” is as well-placed as Ditto’s restrained power on “Winnie” and anytime KD Lang sings backing vocals, you know you’re in for something special, as is the case on “Gumball Blue” and “Last Lion of Albion”. Though her ability to collaborate and share songcraft is impressive, the track that carries the greatest weight of beauty is “Oracle of the Maritimes”, a song that showcases all that is to be admired about Case’s vocals as well as her ability to use those vocals to create atmosphere and emotion.

The greatest challenge to any reviewer of art, as I see it anyway, is to find the words to do justice to a work that is profoundly moving; it is this beauty and clarity of simple humanity (though what is ever simple about humanity?) that creates the verbal roadblocks, and to say that I have struggled to put into words how exceptional this album is would be an understatement. Perhaps my review of this album would best be summed up with simple advice – stop reading my stumbling prose and instead go listen to what will be one of the most memorable albums of 2018.