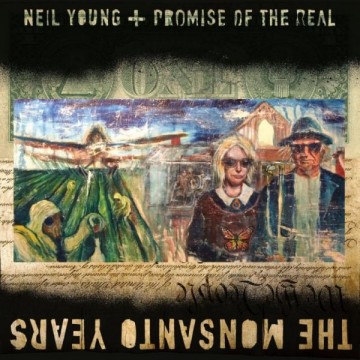 The golden age of protest songs came to an end in the late’60s, but the echoes of that age and the voice of a whole generation are still heard today. They continue to make an impact on our lives. Times, they have a-changed!

In spite of the possibilities of seemingly limitless communication, there are fewer and fewer artists who speak from their heart and make music with depth. Artists like U2 and Pearl Jam come to mind, but they seem a rare exception, not the general rule.

Messages or meaningful lyrics make people uncomfortable and uncomfortable people are a difficult sell. Morals and ethics bring with them a heavy burden, an unnecessary dark cloud in a society that wants candy and rainbows, and the odd dancing shark. Truth be told, people just want to hear about love.

Don’t get me wrong, it’s not all fluff and stuff. There are countless songs and complete albums over the years that continue to awaken the spirit of dissent. Pink Floyd’s “Another Brick in the Wall” and Neil Young’s Living with War are two examples of the frustration, anger, pity, and ultimately utter meaninglessness of war. Black Sabbath’s Paranoid, with its angry track “War Pigs / Luke’s Wall,” is also a good example to behold. There are indeed a few protesting voices, but there may not be enough, and that brings us to The Monsanto Years.

It is not a very polished album. As a matter of fact it is raw. It has that intangible Neil Young signature which permeates all of his work. It is very noticeable that it lacks much of the production value that exists in today’s corporate offerings. It definitely avoids multiple takes and auto anything.

The Monsanto Years is a beautifully crafted and honest reflection on food production. Yes, food production. At first glance, this may not seem like a very sexy topic, but the album guides the listener through a complex world of fundamental human rights that seem to be disappearing. This recording may not be for everyone, but no one, and I mean no one, protests and whistles better than Neil Young!

This is Young’s 36th studio album (Think about that for a minute). Thirty-sixth studio recording! He may be a little older, but there is much youth in Neil Young, and no indication of slowing down. Perhaps this is because he is an eternal musician, or maybe it’s his medicinal herbs, or perhaps it is simply the youthful company he keeps.

If we exclude his lifelong collaboration with longtime friends like Stephen Stills and his tribe Crazy Horse, Young does not collaborate very often. The last time he worked on a full album with an established band was in 1995. At that time he recorded his 22nd album, Mirror Ball, with members of Pearl Jam.

The Monsanto Years is a new collaboration. Young partners up with Willie Nelson’s sons Lukas and Micah, as well as Lukas Nelson’s full-time band The Promise of the Real. There is a deep, multilayered connection here. Young has been a fervent supporter of Willie Nelson’s Farm Aid over the years, which certainly has everything to do with seeds and food production. He also helped and recorded Lukas Nelson’s most recent album Wasted. As a matter of fact, Promise of the Real derives their name from Neil Young’s song “Walk On,” from his fantastic On the Beach album. “Some get stoned, some get strange, but sooner or later, it all gets real.” There is a magical musical cohesiveness throughout the tracks. Side One offers a general reflection and Neil Young’s ire. It is an attack on a society obsessed with profit. Side Two mounts a more personal attack on Starbucks and the Monsanto corporation.

The album begins with an upbeat song of hope and a call for action. This leads to a very moving ode with “Wolf Moon,” reminiscent of Neil Young’s Harvest. It doesn’t take long for the sarcasm, irony, and anger to take root. “Big Box” and “People Want to Hear About Love” are lengthy numbers, filled with a great rhythm and grungy guitar melodies. Young laments the fact that ordinary people don’t want to engage in any conversation of any depth. What they really want are the superficial, instant, feelings of love.

In “Big Box,” he takes aim at Walmart for the way they have withheld basic health benefits from their employees by manipulating their payroll and offering only part-time hours. This is a smart business move, but a decision that stifles the soul.

Workin’ Man” tells the story of an Indiana farmer who earned his living from selling seeds. We learn through the song that Supreme Court Justice Clarence Thomas, who worked for Monsanto, made such practice unlawful. Our farmer finds himself in need of a legal defense because of patent infringement. I am not sure how, but the melody itself is very accusatory, and leads the listener to reflect on something that makes little sense.

Rules of Change” continues the story on a philosophical level, examining the insanity of a man-made corporation owning the genetics of plant life. If seeds can be owned by companies, are we destined to own human DNA as well? Will we go back to owning people?

The Monsanto Years is very seductive. The rhythm sways your soul and hypnotizes your senses. The word Monsato is used like a meditative mantra to help the listener understand the treatise. This is the main track, with a definitive and unrelenting “up yours” message. This is irony and sarcasm at its best.

“Don’t care now what the Bible said so long ago not Monsanto, Monsanto
Give us this day our daily bread and let us not go with Monsanto, Monsanto
The seeds of life are not what they once were
Mother Nature and God don’t own them anymore”

The final track offers a perfect metaphysical conclusion. “If I Don’t Know” is a personal self-reflection. It asks, “is it worth it?” Neil Young wonders if any of his words over the years really make a difference. He wants to know if ordinary people really are too stubborn or if those with power will do what they want anyway. This is a fitting ending, because these simple songs of protest are invitation to continue the discussion. Perhaps a conversation about this album and our Monsanto years can begin here at Spill Magazine, in the comments section.

Grzegorz Kieszkowski originally hails from Bydgoszcz, Poland. After his father was released from prison in 1984, for his involvement with the Solidarity movement, Greg and his family escaped to Canada in 1985. He makes Cobourg his home, along with his wife and two small children. Greg is a graduate of York University, with a double major in English and Philosophy. Music has always been in his blood, and although his tastes have matured, he will always have a soft spot for the Metal days of the late 1980’s. He is a full time English teacher and a professional photographer. Part of the allure of writing is the possibility of conversation, and he would love to hear your comments and opinions. Please feel free to visit his personal website - grzegorzkieszkowski.com.
RELATED ARTICLES
album reviewsneil young & promise of the realreprise records
9.0