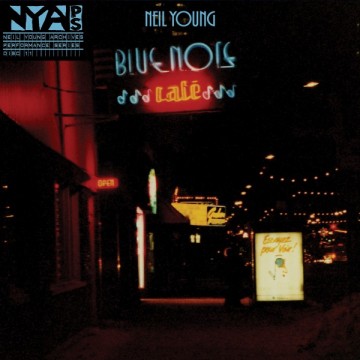 If you are not familiar with Neil Young’s official Archive Performance Series, this is a great time to immerse yourself in this latest offering. The live Blue Note Cafe is the eighth release in the set. It follows the 2013 release of Live at the Cellar Door, likely the best in the series so far.

Here is a chronological (by recording date) list of Archive Performance Series releases to date:

Blue Note Cafe was recorded at various shows between 1987 and 1988. It spans almost a year of performances and documents the tour to promote Young’s This Note’s For You. That studio album was an acerbic response to a then-current musical trend: popular musicians selling their songs to promote various products.

The pop music landscape of the late eighties was dominated by George Michael, Bruce Springsteen, Rick Astley, Whitney Houston, Def Leppard, and Tiffany. During this period, the horn section made a return to the consciousness of the listening public. Springsteen had Clarence “The Big Man” Clemons on saxophone. Neil Young had close friends Ben Keith, Larry Cragg, and Claude Cailliet.
Blue Note Cafe is a harbinger of sorts. During the period in which it was recorded, the Berlin Wall fell, and the decades-old Soviet empire crumbled.

The performance on Blue Note Cafe is superb. But be forewarned that there’s a lot of music here; perhaps too much. There are twenty-three tracks altogether, which in itself doesn’t seem too burdensome. Yet “Tonight’s The Night,” for example, runs nineteen minutes.

Fans of Neil Young will enjoy this disc. Fans of This Note’s For You era Neil Young now have a second chance to enjoy the tour. Others get an opportunity to hear previously unreleased songs including “Soul of a Woman,” “Bad News Comes to Town,” “Ain’t It the Truth,” “Crime of the Heart,” “Doghouse,” and “Fool for Your Love.” Another standout track is the previously-unreleased “I’m Goin’,” a performance recorded at Toronto’s CNE.

As music fans and Canadians, we are lucky to have the chance to hear this release. It should fill the void for a year or two while we wait for the next release, the next installment in the Neil Young Archive Performance Series.

Grzegorz Kieszkowski originally hails from Bydgoszcz, Poland. After his father was released from prison in 1984, for his involvement with the Solidarity movement, Greg and his family escaped to Canada in 1985. He makes Cobourg his home, along with his wife and two small children. Greg is a graduate of York University, with a double major in English and Philosophy. Music has always been in his blood, and although his tastes have matured, he will always have a soft spot for the Metal days of the late 1980’s. He is a full time English teacher and a professional photographer. Part of the allure of writing is the possibility of conversation, and he would love to hear your comments and opinions. Please feel free to visit his personal website - grzegorzkieszkowski.com.
RELATED ARTICLES
album reviewsneil youngreprise records
7.0