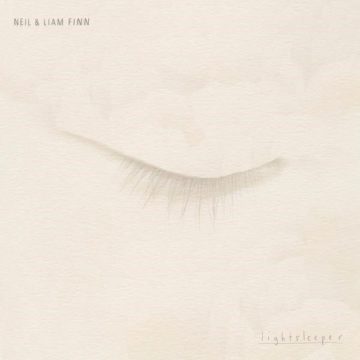 Neil Finn is constantly full of surprises. Just as he announces that he is joining Fleetwood Mac and preparing for that huge stadium tour, he releases this album with his son, Liam. Lightsleeper is a true family affair. Neil’s wife plays bass on a couple of songs (she is in a band with husband Neil, Pajama Club), and Elroy Finn, Liam’s brother also plays drums. The only family member missing is Neil’s brother, Tim. New bandmate, Mick Fleetwood even makes an appearance.

Liam Finn has his own following and career, with three studio albums under his belt. His last studio effort, The Nihilist was a top ten success. All that to say that he does not need his father to have his own career. Perhaps, Liam is bringing younger fans to his father? I also think that this album seems to be a labour of love, not necessarily with an eye for a hit.

It would be nice to report that this album is stellar and is everything one would hope and expect from Neil Finn and his family, sadly this is not the case. To my ears, Lightsleeper is lacking a great deal. Both of the Finns are known for their remarkable melodies and strong lyrics, but neither are really evident on this particular album.

Neil Finn’s most recent solo album, Out Of Silence, was a very unique and brilliant album. Its history (the recording of the album was live streamed) was a fresh take on recording and the album itself was brilliant. So, there were a lot of hopes and expectations for Lightsleeper once it was announced.

The problem with the album is lack of focus. It really does not know where it wants to go and as such it is very disjointed, feeling like a number of songs assembled for an album rather than an album in its entirety.

The album has a promising start with “Prelude – Island of Peace”, full of interesting sounds, brilliant production and the famous Finn melody. There are other highlights as well, “Ghosts”, “Back To Life” and the last song, “Hold Her Close”.

And that is what is so frustrating about this album. The consistency is just not there, because between these songs are a number of mediocre ones that would work as B-sides but do not live up to the other tracks. Say what you will about Neil and Liam Finn, but mediocre is not a word used in describing their music.

Both Neil and Liam are capable of creating original, moving, thoughtful and beautiful music. On Lightsleeper, they do this, but it is sparse. The songs that work demonstrate all of these noted qualities, but there appears to be filler.

Born and raised in Whitby, Aaron discovered music through his love of The Beatles. This led to a career in radio, writing for various publications, and ultimately a radio show about The Beatles (Beatles Universe), which ran for over four years. When not immersed in music, Aaron enjoys spending time with the loves of his life -- his wife Andrea, and daughters Emily and Linda (all of whom have an intense love of music too).
RELATED ARTICLES
album reviewalbum reviewsghosts
8.0