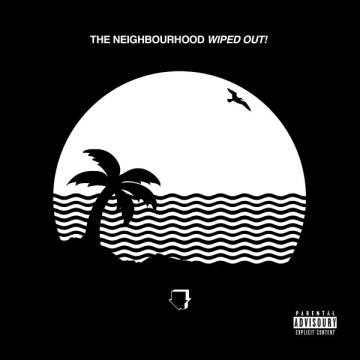 The Neighbourhood
Wiped Out!
Columbia Records

When “Sweater Weather” hit radio two years back, The Neighbourhood’s concoction of hip-hop, pop, R&B and indie rock fueled fire to their popularity as a genre-bent band capable of producing mainstream hits. The first record, I Love You., proved to be somewhat juvenile lyrically but masterful in arrangement, producing plenty of quality instrumental moments on a record that otherwise felt stained with its ‘debut’ status.

For record two, the boys of The Neighbourhood haven’t entirely grown to maturity. In fact, their lyrics still fall somewhere between strongly justified (see “Baby Come Home 2”) and lacking substance. You’ll especially notice the latter on “Daddy Issues” when the chorus churns out “if you were my little girl, I’d do whatever I could do, to run away and hide with you, I love that you’ve got daddy issues, and I do too”. The difference, this time, is that the complexity of genre-mixing that the band attempts is less jarring, and feels slightly more balanced. This plays out positively and negatively all the same. The Neighbourhood shines, again, with their arrangements. Knowing where their craft works is immensely important, evident by the sonic clarity of singles “Prey” and “The Beach”. “Ferrari” stands out as it hums with post-rock bliss layered by a pop structure. Other arrangements falter. Some don’t even exist. The opener “Moment of Silence” is, inexcusably, exactly what the title suggests. “Cry Baby”, while remaining catchy, sounds more like a refined Backstreet Boys demo than a step in the right direction.

It’s admirable though, that on the almost-seven-minute-long title-track, Rutherford honestly admits “I’m back and forth, I think I’m going crazy…I’m hoping that I’m never satisfied”. The repetition of these words calls as a statement from the band about their difficulty to settle into one sound comfortably. There’s nothing objectively wrong with this, of course. The Neighbourhood is playfully enjoying their lack of identity. Whether their indecisiveness is a conscious choice to showcase their versatility or comes from an inability to find common ground has yet to be determined. As a listener, however, Wiped Out! can be perfectly summed up by the formula of its title-track – it is constantly attempting to showcase change but ends without ever reaching a satisfying conclusion.

Robert Defina is an avid critic both on paper and in person. He spends more time writing album reviews than he does worrying about his future. He hopes that this sort of procrastination never grows old.
RELATED ARTICLES
album reviewscolumbia recordsprey
7.0