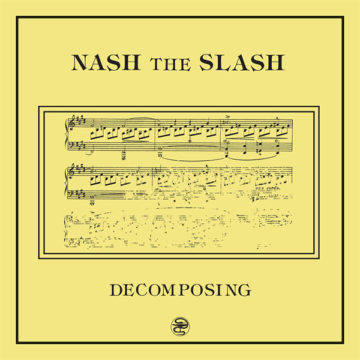 Originally released in 1981 (at the height of New Wave and the Eurobeat), Nash The Slash went back to his roots and recorded instrumental music, and created a most unusual EP/Album.

Let me explain: it was an EP, as it featured four songs, however, Nash figured that the songs could be played at variable speeds and thus new created different songs. Each song was designed to play at 45, 33, or 78 RPM, and since most turntables at the time still featured the 78 RPM setting, four songs became 12; an album. The result, Decomposing. The title coming from the old joke, “What is that terrible sound coming from Beethoven’s gravesite”? “Just Beethoven decomposing.”

Having left Virgin/Dindisc Records, this album was released the same year as his successful solo album, Children of The Night. But Nash left the majors and went back to being independent with his Cut-Throat records label. This allowed Nash the freedom to explore his sonic world, and part of that freedom was deconstructing classical and rock music.

The music is melodic, disturbing at times, very dense, and not instantly accessible. The songs go back to Nash’s love of prog rock and early 70s rock anthems. The songs don’t play as individual tracks but rather as one long extended piece. It’s much like an ambient album, only with more production and melodic song structure.

The songs flow in and out and create atmosphere, mood, and tone. What fascinates me is how different the songs sound at their respective speeds. The speeds in which the songs are played never seem to make the music lighter, but the songs sound markedly different. Listen to “Pilgrim’s Lament”, and listen to the three different songs created from one piece of music. It is a dazzling experiment that worked.

Of course, this wasn’t the first time this happened with Nash’s music. His first LP, Dreams and Nightmares, was played at 45 RPM instead of 33 RPM by disc jockey David Marsden. Nash actually reissued the LP with the changed speed, but that was not intentional. Decomposing was planned this way.

Artoffact Records have done an excellent job with this reissue. The cover is restored perfectly and all 12 versions sound amazing. It is fantastic that Nash’s music is available again, and the fine folks at Artoffact records continue to take great care in Nash’s back catalog and make sure the reissues represent the true talent of this artist.

Born and raised in Whitby, Aaron discovered music through his love of The Beatles. This led to a career in radio, writing for various publications, and ultimately a radio show about The Beatles (Beatles Universe), which ran for over four years. When not immersed in music, Aaron enjoys spending time with the loves of his life -- his wife Andrea, and daughters Emily and Linda (all of whom have an intense love of music too).
RELATED ARTICLES
album reviewsartoffact recordsdecomposing
8.0