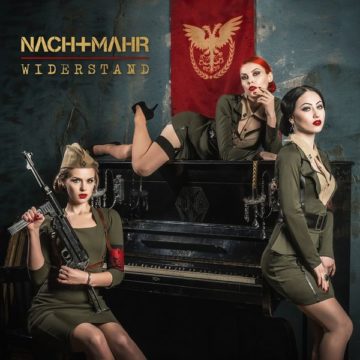 “Firmament”, the original version, features a deliciously eerie piano intro leading into a pulsating and throbbing dance beat that is sure to draw out a crowd. Rainer’s lyrics are in German and are full of those rough and guttural tones that make the language a delight to listen to. I look forward to this song being played on the dance floors very soon.

I’m a fan of the Russian vocal version featuring synth pop band Omni-mar. The sensual female vocals on this version add a new alluring element to the already enticing track. Industrial metal band Shaâghot took this track and made it even harder, more manic and a further assault to the senses. It’s great.

“Ungezähmtes Land”, in its standard carnation, at first sounds like many an industrial track I’ve heard played at the clubs into the chorus kicks in. It’s gorgeously melancholic and melodic. It’s luring; easy to fall into a trance with this one.

The Russian version of this track featuring Eisenwut with Michael Evdokimov on vocals – his voice reminds me so much of Til Lindemann from Rammstein, but of course in Russian, that it’s playing tricks with my mind.

The remix by Affentanz doesn’t seem to do the track any favours – it’s far too processed and filtered, in particular the vocals, for my taste. On the other hand, Greg Oroth’s version features heavier guitars giving the track a more power metal vibe that works very well.

Ordo Rosarius Equilibrio offers a cover of the track in English which, paired with the down tempo and darkly morose tune, feels strange and oddly uncomfortable.

And yet “Mütterchen Russland” with a similar slower and ominous tune is richly haunting and beautiful, very poetic.

I wish there was more in this EP than three songs and a few remixes but that should all be rectified when the full length album is released. Unsure when that will happen but, as someone who was originally unfamiliar with the band, it’s something I’m now looking forward to.

Samantha is both a writer and a fan of the arts and has been able to find numerous ways to pair the two. Eager to dive head first into writing for Spill, Samantha is an avid partaker and reviewer of live art in Toronto serving as an editor at Mooney on Theatre exploring live local theatre, she's a photojournalist for Been Here Done That, a travel, dining and tourism blog that focuses on Toronto and abroad and previously for Lithium Magazine. She's passionate about music, theatre, photography, writing -- not necessarily in that order. She drinks tea more than coffee, prefer ciders over beers, and sings karaoke way too loudly. You can follow her on various social media including Facebook, Twitter, and Instagram.
RELATED ARTICLES
album reviewalbum reviews
10