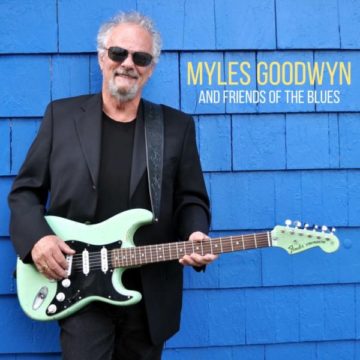 You have to give Myles Goodwyn a great deal of credit. He is known for his work with April Wine, and April Wine have never been known as a blues band. A talented band, led by Goodwyn who wrote and produced some of the greatest pop/rock records in the last five decades, but they were not a blues band.  Therefore,  no one could predict that Goodwyn would come up with a blues album for his second solo album. The fact is Myles Goodwyn and Friends Of The Blues is a brilliant album. Blues fans should appreciate it and like it and April Wine fans just might find out that they love the blues as well.

April Wine debuted, on vinyl, in 1971 (April WIne) and would go on to release 20 studio albums. The most recent being 2006’s Roughly Speaking. Underneath the pop/rock standards that Goodwyn created was a tinge of blues, but he was never able to cut loose with a full on blues album, until now.

Goodwyn’s first solo album was released nearly 30 years ago (Myles Goodwyn), and like that album his solo work affords him the opportunity to play music that he loves without the worry of making it an April WIne album. For this album, he has called in some friends, who happen to be some heavy hitters in the blues genre. This is a stroke of genius. There is no doubt that he could have carried it off himself, but by playing with blues musicians, he is able to remove all doubt about his sincerity for the project.

Goodwyn wrote all but one song (he does a remarkable cover of Jesse Winchester’s “Isn’t That So”),  and what is evident, besides his obvious love of the blues, is his sense of humour. Songs such as “I Hate To See You (But I Love To Watch You Walk Away)” (which has a brilliant video), “I Hate You (Till Death Do Us Part)” and “Tell Me Where I’ve Been (So I Don’t Go There Anymore)” show his humour. The songs are pure blues, but the lyrics are humourous (maybe with a tinge of melancholy) and at times downright funny. Meanwhile, Goodwyn is playing some very hot blues licks. A great combination.

Goodwyn developed a taste for the blues in the 1960’s and that music influenced his writing and playing as much as The Beatles. Goodwyn has said he was influenced by Howlin’ Wolf, B.B. King, and Muddy Waters, to name just three. Listening to this album one can hear these influences. He does not copy, but rather incorporates years of listening to the greats and using what he learned to create his own blues sound, much like they did all those years ago.

Myles Goodwyn and Friends Of The Blues is not only a great blues album, it is a great album. It is obvious when one listens to the album that Goodwyn put a great deal of effort into this record and it paid off. As much as I love April Wine (and I do love their music), I hope that we hear more from Goodwyn’s blues side.

Born and raised in Whitby, Aaron discovered music through his love of The Beatles. This led to a career in radio, writing for various publications, and ultimately a radio show about The Beatles (Beatles Universe), which ran for over four years. When not immersed in music, Aaron enjoys spending time with the loves of his life -- his wife Andrea, and daughters Emily and Linda (all of whom have an intense love of music too).
RELATED ARTICLES
album reviewsapril winei hate to see you go ( but i love to watch you walk away)
7.0