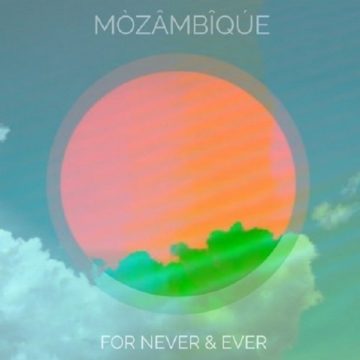 MÒZÂMBÎQÚE
For Never And Ever
Text Me Records

To be honest, I was not sure what was going to come at me when I slipped For Never And Ever on, but I can tell you, I was not expecting what I heard. For Never And Ever is MÒZÂMBÎQÚE’s debut album. A number of singles have been issued under the name MÒZÂMBÎQÚE who is, in reality, Andrew Smith from Talk Time, a new band based in L.A. To be clear, however, MÒZÂMBÎQÚE does not have that indie L.A. sound and the album sounds like something out of another time and continent.

A primarily instrumental album, For Never And Ever takes the listener on a ride. I say primarily as there are songs with different forms of vocals. Smith manages to marry these forms together into one cohesive album. Listen to the almost Yellow Magic Orchestra vibe of “Chasing Weather”, which leads into the rap song, “Ditto (ft. Fuku Neza)”. It should not work, and yet it does. The album has a wonder flow from Euro Synth Pop to pop to all stops in between.

Smith writes and creates painfully beautiful melodies. “False Bay” is an incredibly moving ambient song with perfect production and simple, yet stirring movements. The same can be said for “Fwd: The Light”, a beautiful piece with wonderful layered vocals at the right moments.

Perhaps the stunner of the album is the last track, “Hands/Sum (ft. Ryan Taylor)”, a song that one initially thinks would not be out of place on a Sigur Rós album. That is until Taylor comes in with his strong vocal performance. The delayed and layered vocals fit together in a manner that creates intense yearning. Again, Smith layers his sounds along with the vocals, yet at the core of it all is a beautiful melody. It just keeps building, and for 3:55 the listener is taken into a landscape.

Other vocalist deserve mention, Lone Kodiak, who is featured in the song “Distance” and Jordan Corey who sings on the title track. Kodiak provides the layered vocals that fit so well with Smith’s music and the song benefits from the vocals. Corey provides the perfect sounds and vocals on “MÒZÂMBÎQÚE” and it is probably the most conventional song on the album.

For Never And Ever is a brilliant album. It is hard to believe this is Smith’s debut album, as he does have the sound and confidence of an artist who is well into his career. He manipulates sound and music to form a distinct sound. This is the perfect soundtrack for late night summer evenings, and one that will be played a great deal around my home. Excellent album through and through.

Born and raised in Whitby, Aaron discovered music through his love of The Beatles. This led to a career in radio, writing for various publications, and ultimately a radio show about The Beatles (Beatles Universe), which ran for over four years. When not immersed in music, Aaron enjoys spending time with the loves of his life -- his wife Andrea, and daughters Emily and Linda (all of whom have an intense love of music too).
RELATED ARTICLES
album reviewalbum reviewsmòzâmbîqúe
8.0