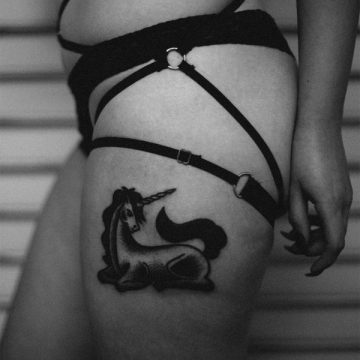 Los Angeles-based group Moving Units have recently released their fourth album, Damage with Care via Metropolis Records (April 8, 2016). As with the previous three albums, you can expect Damage with Care to be just as high-energy can’t-listen-sitting-down as you’ve come to expect from this group.

Leading off the album is “Hyatt Girls,” drawing listeners into a heavy Indie Punk Dance sound that begs to be played at all your summer dance parties. Having first seen Moving Units at Coachella five years ago, Moving Units has shown no sign of slowing down. Their energy is heard and felt on each track of Damage with Care. The band is a pioneer of this Punk-Dance sound – in 2002, when their first album debuted, you would see Moving Units packing venues with “too cool for school” early adopters, loving the music almost apologetically. Fast forward to today, and those same longtime fans are now dancing with abandon, outwardly showing their support and love for a band that has never hid anything, itself.

“House of Dolls” the next song you should play. It is full of authentic truth, backed by rebellious beats. This latest offering is highly reminiscent of ‘70s British Punk – less Sid and Nancy, but more Joy Division. The heavy synth and bass is not overwhelming, as is often the case when comparisons are made to the Brits’ sound. The beats of those instruments are seemingly used more like a vehicle that you jump in and allow yourself to go where the band takes you.

That journey feels like a maturation for Moving Units. I remember watching them in 2011 and while I was definitely a new fan of their energy and sound, the band felt almost standoffish, playing at us rather than for us or with us. An almost forced swagger is what I remember feeling, more than being moved by the music. Perhaps it’s a sign of our new more transparent world; I now feel this album is more inclusive. More consistent and honest, Damage with Care reflects the new feelings I get from watching the band interact on social media or from listening to their songs.

The way this album is arranged is done with purpose. “House of Dolls” closes the album with a Disco-ish sound. It is both edgy and sexy, much like the feel you are left with, listening to Damage with Care as a whole. Undoubtedly you are left still tapping your feet after the last chord is played, but you are also engaged on another level. Fronttman Blake Miller has also gotten into your head with haunting lyrics, leaving you questioning beliefs about yourself, what beauty really means, and even society as a whole. That vulnerability is what is the most connecting about this latest album.

Currently on tour in support of this album, you can find tour dates and tickets HERE.

Lucy Rendler-Kaplan is a native Chicagoan, recently returning home after 10 years in Los Angeles. Having worked in field marketing for the past 17 years, Lucy recently left corporate America to work as a consultant. When not running, Lucy can most often be found out with her dog, watching an NFL game, or listening to live local music. Passionate about writing, Lucy enjoys writing about music in lieu of playing it.
RELATED ARTICLES
album reviewsdamage with caremetropolis records
9.0