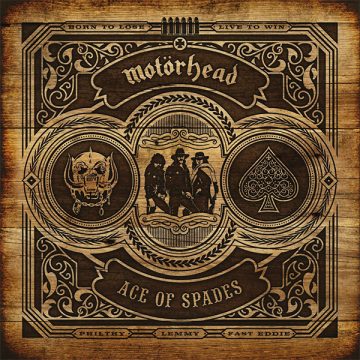 Year of the Rubik’s Cube. CNN launches this year and we can now leave reminders on Post-It Notes. Light pop acts such as Captain and Tennille, Olivia Newton-John and Blondie dominate the billboard charts.  Synth bands like Depeche Mode are about to usher in a new wave in music. Heavy metal is also experiencing a renaissance as well at this time. Considered as part of the New Wave of British Heavy Metal, acts such as Iron Maiden, Judas Priest and Motörhead are beginning to establish themselves as a staple for any hard rock fan.

Lemmy’s vision for Motörhead was to make fast, hard music and famously said that Motörhead is so loud that if we moved in next door your lawn would die. Ace of Spades is loud and hard and really just plain good old rock ‘n’ roll. It’s also just a lot of fun. How can you not chuckle at titles like “Love Me Like A Reptile” and “Jailbait”. Motörhead’s strongest material can be found on this album, with “The Chase Is Better Than the Catch” and the title track as definite classics.

As part of the boxed set, Motörhead fans can view vintage concert footage and listen to live performances of material from Ace of Spades and from previous albums such as Bomber and Overkill. There are even instrumental demo versions to use for your next karaoke party (if we ever get to have a party with more than ten people). The interviews will highlight the band’s sense of humour and allow us to see Motörhead’s efforts to promote Ace of Spades.

So pour yourself a Jack and coke and enjoy

An educator who also tries to introduce others to great music. It's a never ending job.
RELATED ARTICLES
album reviewalbum reviewsbmg
7.0