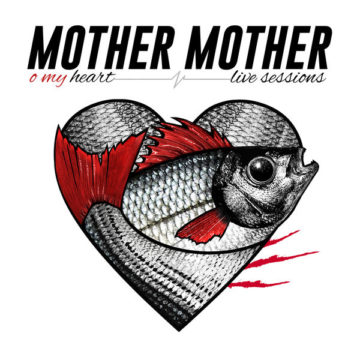 Ten years after its release, Canadian indie rock group Mother Mother has decided to revisit their very first album, O My Heart. Rather than do a simple rerelease or tour alone, the band has recreated six of the album’s original 13 songs in live sessions. While the songs still breathe the same air of weirdness and deviance, much has changed since 2008.

The most obvious swap from the two albums is the change of ex-vocalist and keyboardist Debra-Jean Creelman for Jasmin Parkin who has been in the band since early 2009. Jasmin’s vocals add a spookiness that the band has become synonymous with the group.

This small group of live sessions are fairly stripped down from the original album which featured trumpet, violin, organ and more. O My Heart: Live Sessions features very little of the fuss but still all of the soul. Lead singer and guitarist Ryan Guldemond’s vocals are spot on, backed up by the chorus of his sister Molly and Jasmin Parkin. The album also proves that these songs have stood the test of time just as the band has.

Opening on the title track “O My Heart”, the band hand selected some fantastic choices to make the cut including “Burning Pile”, “Body of Years”- a slightly punched up track compared to the rest of the album, and the ever-spirited “Wrecking Ball”.  Playful and dark, the live sessions are surprisingly easy and soothing to listen to despite the self-loathing, aggressive and all-around wild lyrics.

Closing the album however is the real pièce de résistance, “Hayloft”. This crafty song quickly became a fan fave since the original album release but since then has only picked up momentum — particularly in recent years when mashed up on stage with Led Zeppelin’s “Dazed and Confused”.  The track on O My Heart: Live Sessions is far slower, the tempo making it seem as though it’s dragging from one ear to the other in a most pleasant manner, dripping like honey before coming to a sudden close.

Overall, the Live Sessions of O My Heart are a fun experiment and add to the discography for long-time fans.  Not incredibly combative, the juxtaposition with these classic songs and lyrics makes listening a real treat.

Gabrielle Mueller is a lover of all things music, writing and charcuterie boards. Gabrielle has a particular passion for music of the 1960s and the hippie movement in Toronto’s Yorkville district. Gabrielle runs her own music website, The Hippie Historian, where she reviews concerts, interviews musicians and writes about music history that spans the ages.
RELATED ARTICLES
albumalbum reviewalbum reviews
7.0