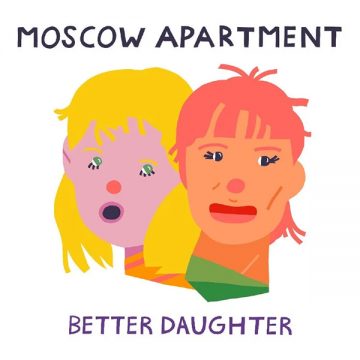 Better Daughter is the sophomore release from the Toronto-based duo, Moscow Apartment. This is a much more serious effort, tackling subjects that are not always found on the radio. The EP is the sound of two young people coming to grips with what is going on around them.

The title track itself, “Better Daughter” is pro-environmental and refers to being children of Mother Earth and being better children to the planet, while other songs deal with growing up (“18”), stress and anxiety (“Halfway”) and sexual assault (“New Girl”). Not easy subjects to write about, but Brighid Fry and Pascale Padilla are able to do so with care and empathy while advocating and calling attention to such issues. At the same time, the band can also come up with interesting and odd songs such as “Meredith Palmer”. Fans of The Office  will particularly enjoy this song.

Musically, the band has grown as well. The tight, haunting harmonies are still there, and the music continues to be acoustic-based folk, but there is an edge there now. An edge that has, no doubt, come from performing live with a full band and creating music with other artists. Although the two produce the majority of the EP, working with very experienced producers has assisted the band in filling out their sound. Vance Powell, who is known for his work with Phish and Jack White, and Guillermo Subauste help out on a few songs, and they certainly contribute to Moscow Apartment’s overall sound.

Better Daughter is a fantastic EP and a welcomed return from Moscow Apartment. The fact that they continue to evolve and develop is very positive. It is also a great example of a young band who is moving forward and eager to explore their musical environment.

Born and raised in Whitby, Aaron discovered music through his love of The Beatles. This led to a career in radio, writing for various publications, and ultimately a radio show about The Beatles (Beatles Universe), which ran for over four years. When not immersed in music, Aaron enjoys spending time with the loves of his life -- his wife Andrea, and daughters Emily and Linda (all of whom have an intense love of music too).
RELATED ARTICLES
album reviewalbum reviewsbrighid fry
8.0