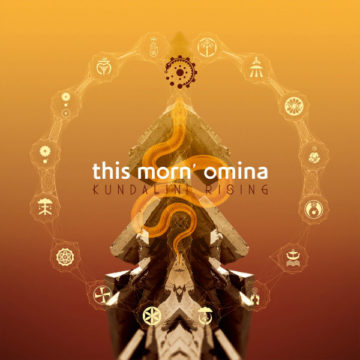 In the obscure and bewitching realm of rhythmic noise, This Morn’ Omina is among the most celebrated catalogue entries. Nothing even begins to compare to the experience of this Belgian troupe’s acoustic production – they are visionary musicians on the cutting edge of the style.

It’s been six long years since L’Unification Des Forces Opposantes on Ant-Zen, yet This Morn’ Omina’s reputation among lovers of the genre has not faltered in the slightest. Their productions are heroic in scope and size, the Gilgamesh opus of obscure electronica. In keeping with this tradition, the new album is a magnificent and comprehensive chronicle that bridges the chasm stretching from their last release. The Sumerian analogy is hardly incidental – there is an overt mythicism in This Morn’ Omina’s body of work. The title Kunadalini Rising carries an undeniable lore, a lyrical vernacular that is the idiosyncratic product of the artists’ imagination.

This Morn’ Omina has a ritualistic quality – worship music for a pagan, sinful technocracy. It is characterized by fiendish drumming, a fast paced tempo cut with distortion that blends wonderfully with the serene underlying melody line, obscure, ululating verses and tribal chants. Mika & Co have a distinct niche in that market, forming a strange aural space of postmodern mysticism.

There is a cabalistic beauty in the fiery tempo of the first CD. It invokes imagery of a taiko drummer troupe sitting atop a post-apocalyptic city’s ruins, praying for the fate of the shattered world. The second disc of the collection slows its pace to reveal a meticulous glimpse into This Morn’ Omina’s pastiche of clipped sound samples. The structural complexity in their music is unrivalled; every minute bell and whisper contributes to the frightful harmony that is their trademark.

The outpour of inspiration in Kundalini Rising is overwhelming. This album has been a long-time coming, and the release is evidently cathartic bliss for the artists as much as for the anticipating audience. It’s a pleasure and an honour to be once again privy to the chimerical output of This Morn’ Omina’s transcendent creativity.

I’m a geeky weirdo with her fingers in all sorts of pies. I paint and illustrate all sorts of nonsense, I make strange noises. I rant and rave, set things on fire, I’m an awesome cook and I throw a mean party.
RELATED ARTICLES
album reviewsdependent records
8.0