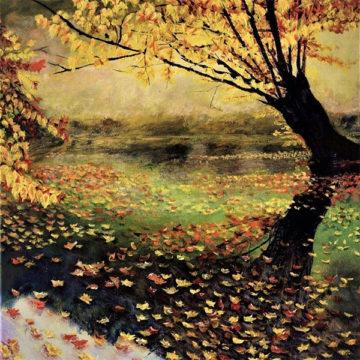 Being a great singer/songwriter is like hitting in baseball; as long as three out of your ten lines are descriptive, innovative, and interesting then you can be considered one of the greats. However, those few lines have to really hit home. Leonard Cohen was the king of pensive lyrics and had a much higher batting average than his peers. Lines like “The sun pours down like honey on our lady of the harbor,” from the song “Suzanne” create images so impactful that the listener doesn’t just see it, they feel it. Bob Dylan is also famous for lines powerful enough to knock your socks off your feet. “It was gravity which pulled us down and destiny which broke us apart,” is a lyric pulled from the track “Idiot Wind” which not only helps tell the songs story, but helps the listener realize the shackles of existence which they will never break. These lines are examples of great poetry, the kind of great poetry you will not find on Morgan X Barrie’s, Fall. While Barrie is brave enough to step up to the plate and take a swing he ultimately strikes out.

Barrie is guilty of many poetic crimes on Fall. He frequently leans on common literary tropes and is incredibly vague throughout. Of all of the songs, the most creative moment comes from “Lost Then Found” in its slight alteration to the idea of an actual lost and found. The song “Plastic” may be the most cringe inspiring in its meat-headed and simple lyrics. He describes the synthetic nature of his life in the song and uses cheap retail oriented metaphors throughout the track. The imagery is stale and will only remind listeners of the exhilarating environment in which they buy packs of socks. Barrie also seems to have a lack of understanding of poetic meter. Many of his lines are filled with far too many words which completely disrupts the vocal melody. It sounds forced and throws off the rhythm for the moment in the song.

The fact that Barrie sings in a whisper does not help his cause. Whispery vocals are difficult to pull off, for if you add too much rasp or put the emphasis on the wrong words it becomes clear that you’re trying way too hard. His voice sounds much better on songs like “Time To Come Home,” where doubling up on the vocal track works to great effect.  The acoustic guitar on Fall is certainly the stand out instrument. Tracks like “The Letter” and “Autumn” boast guitar parts which are tasteful rather than flashy. For the most part, Fall’s music will inspire calm in listeners and will provide joy in the listening experience despite the poetry.

While songwriting and poetry are for everyone, albums like Fall prove the worth of a good literary and musical education. Sure, there is something to be said for unpolished writing but it can often be clunky which negatively affects the works message. The topics which Barrie covers on Fall are as fine as any and sound personal; if he would have described them with powerful language Fall would have been a record for the ages.

The Spill Magazine is a Toronto-based online publication dedicated to covering the independent music scene with a strong focus on our thriving hometown talent. Our writers bring you up-to-date news, in-depth features on musicians and reviews for the latest CD releases. We also travel to the front lines for all local festivals including Canadian Music Week and North by Northeast. Don’t forget to check out our Facebook and Twitter pages for all daily Spill updates.
RELATED ARTICLES
album reviewscontrolfall
6.0