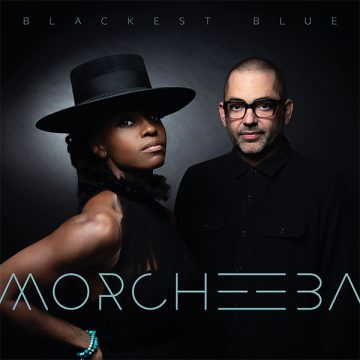 London-based Morcheeba once passed as a Thievery Corporation with actual songs, or a less jazzy Olive, or like Massive Attack without the paranoia and the politics. But whether it’s called downbeat, trip-hop, electro-pop, or neo-soul, it’s the human presence amongst all the gear that distinguishes them. Fundamentally they are musicians, and their chops playing real instruments have enabled them to roll up any genre they like into their pop smoke.

With gnarly slabs of funk bass, organ stabs, and overdubbed soul harmonies, “Killed Our Love” recalls The Stylistics in an upbeat number that makes no effort to conceal the heartache underneath, And maybe a Novation BassStation too. First single “Sounds of Blue” nails the classic trip-hop sound with a languid bassline full of thirds and soft-focus trap percussion. Vocalist Skye Edwards’s gorgeous voice somehow laments and soars simultaneously, only to sink down into the watery void of an unexpected bridge. A lap steel guitar from Ross Godfrey sneaks in some countrified comfort before closing the curtain. On paper, “Say It’s Over” shouldn’t work, a piano-based breakup duet lead by the initially jarring appearance of Godfrey’s voice. However, he and Edwards have some real chemistry, and the song’s change-up is precisely placed when one is needed in the album’s perfectly sequenced running order.

Blackest Blue does contain some lyrical and production missteps, notably the cliches peppering album opener “Cut My Heart Out”: “My mistakes were like hard rocks on a glass house” and “Tossed away like a rag doll that you’re bored with.” The fuzzy bass isn’t funky enough, and the background haze doesn’t quite mesh, like they were recording next to a grocery store during business hours (which, ironically, more or less happened when they made Who Do You Trust? in 1996.) What saves the track is Godfrey’s guitar work introducing the song before gliding through the end to tie it all up; his guitar tone sounds like he’s spraying molten lava from a paint can.

If the fractal, harmonic resolution of Godfrey’s bass guitar in trippy second single “Oh Oh Yeah” doesn’t confirm that Morcheeba still smokes pot, Edwards’s line, “Let the trees help you breathe with me” certainly does. A Foxy Brown guitar figure from Godfrey shuts down the smokeout, and everything dissolves.

Charles T. Stokes is a nonprofit resource development coordinator and donor researcher based in Denver, USA. He’s also a tennis player and writer looking to make a racket with his own noises. “There are places in the world where one cannot publicly listen to or perform whatever music they choose without fear of harassment or prosecution. The freedom to write about new music is power, a privilege.”
RELATED ARTICLES
album reviewalbum reviewsblackest blue
7.0